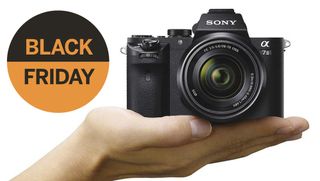 The Sony A7 II is a great mirrorless camera from a great family of mirrorless cameras. This full-frame model is the second generation A7  - and this is a particularly good deal as it gets Sony's built-in image stabilization, as well as the large sensor.

The Mark II is a serious step on the Sony A7 (which is also still on sale, and can be found in sales elsewhere), but the A7 II is a completely different proposition, with Sony’s 5-axis in-body stabilization, improved autofocus and enhanced video.

The A7 II has a full-frame 24.3 megapixel sensor, hybrid contrast/phase-detection autofocus improved ergonomics and an ISO 50-25,600 ISO range. It doesn’t shoot 4K video, but it can shoot full HD at up to 60/50fps. The A7 II also has Wi-Fi built in and a tilting rear screen.

Sony A7 Mk II full-frame camera + 28-70mm lens:£899
Amazon UK is knocking £300 off the price of this second-generation full-frame mirrorless camera from the Sony A7 stable. This model adds in-body image stabilization to the mix - for steadier shooting. This all adds up to a spectacular full-frame mirrorless deal (and yes, this price does include the 28-70mm zoom).
UK deal ends: midnight 29 November (GMT)View Deal

• These are the best mirrorless cameras you can buy right now

• How to choose the best Sony camera