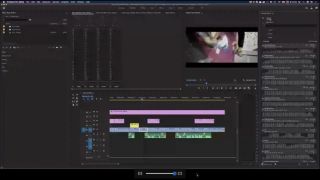 Adobe is as active in the field of video editing as it is in photography and design, and the latest announcements in its June updates look particularly exciting for videographers and content creators – though not all of them will be available immediately.

For professional video editors, the new stock audio feature in Premiere Pro could be real time-saver. You will be able to search for and browse stock audio content to go with your footage, and buy and add it without leaving the software. Stock audio is especially useful for background ‘mood’ music, for example.

This comes soon after the news that Premiere Pro will finally adopt the increasingly important ProRes RAW format in both Premiere Pro and After Effects. Premiere Pro is one of the best video editing software programs you can buy, though for those just starting out, there is also the more novice-friendly Premiere Elements 2020.

For professional video editors, the new stock audio feature in Premiere Pro could be real time-saver. You will be able to search for and browse stock audio content to go with your footage, and buy and add it without leaving the software. Stock audio is especially useful for background ‘mood’ music, for example.

The other major new feature for Premiere Pro is a little further off, but its development its already well under way.

While the stock audio feature in Premiere Pro is to arrive straight away, there are three more video technologies which are so far only at the ‘preview’ phase. They will become available to try out to those who have signed up for the Adobe beta testing program, but are not due to arrive in final production software just yet.

And then there’s a new Roto Brush 2 feature heading for Adobe After Effects, which can identify and isolate objects frame by frame and potentially save a great deal of time and effort.

Meanwhile, in Premiere Rush, which is Adobe’s video editing app aimed at mobile content creators, there will be a new Auto Reframe feature first seen in Premiere Pro last year. This can identify and track subjects in cropped or reframes video, saving you the effort of having to do this manually. It looks like the video editing equivalent of subject tracking.

The Auto Reframe feature will arrive in the Premiere Rush public beta in June, but there’s another new feature that’s a little further off, called Pan and Zoom. It’s a tool for animating still images using automated pan and zoom movements familiar to anyone who’s used the Ken Burns effect. It looks particularly useful for combining still images with video clips.