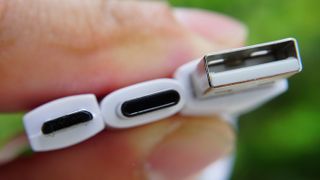 The USB Implementation Forum has revealed the final specifications for the upcoming USB 4 standard. The big news is that, at 40Gbit/s, it’ll be twice as fast as the current fastest version of USB 3.2. The specs are very similar to the Thunderbolt 3 standard, largely because USB 4 is based on Intel’s Thunderbolt protocol.

USB 4 devices are expected to be available in 2020, with USB 4 itself being backward compatible with Thunderbolt 3, and USB versions as old as USB 2.0. The connector is the reversible Type-C plug to which we’re now getting well accustomed, enabling cross-compatibility with Thunderbolt 3 ports.

While computing equipment manufacturers will likely be quick to adopt USB 4 in their products, camera manufacturers are almost certainly going to be slower to the party, given their reluctance to incorporate USB 3. Take, for instance, the Nikon D7500. Even though this DSLR was released as recently as 2017, it still makes do with a USB 2.0 connection - a full six years after USB 3.0 was introduced.

Possibly even more exciting than the speed boost provided by USB 4 will be that, for at least a brief period of bliss, order will be restored to the USB numbering convention.

As it stands, the recent renumbering and re-renumbering of USB 3 generations is getting ridiculous. First there was USB 3.0, launched in 2011, with a 5Gbit/s transfer speed - great, no confusion there. This was then improved upon by USB 3.1 in 2013, which, at 10Gbit/s, was twice as fast as USB 3.0. All well and good.

Hopefully USB 4 will put this naming insanity firmly in the past.

The best laptop for video editing