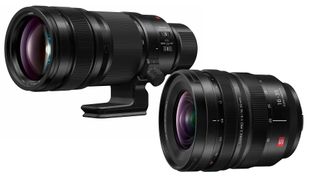 Both lenses were already on the previously published Panasonic L-mount lens roadmap, but they’ve just been made official – though they won’t be available for purchase until January 2020.

The Panasonic Lumix S models are not just the best Panasonic cameras, they are also among the best cameras for professionals – though they will need a strong lens system behind them to take on Canon, Sony and Nikon.

This is not the first 70-200mm lens for the Lumix S system. It joins the Lumix S PRO 70-200mm F4 O.I.S. lens which was launched alongside the cameras themselves. That lens’s f/4 maximum aperture was unlikely to appeal to professionals, however, who will be far more convinced by the f/2.8 aperture of the new lens, and which is in line with pro telephoto zooms from other camera brands.

Optical performance is clearly high on the agenda, as this lens also has a double focus system to control aberration at short subject distances, and Panasonic claims high performance from the center of the frame to the edges, and over the whole zoom range.

The new lens also contains an O.I.S. (Optical Image Stabilizer) to work alongside the in-body stabilization in the Lumix S1 and S1R for a maximum claimed shake compensation value of 7EV. There’s a focus clutch for switching quickly between AF and MF modes, and focus breathing is suppressed to make this an ideal lens for video, not just stills.

This lens is arguably even more important than the 70-200mm f/2.8 because until now Panasonic Lumix S users have not had any Panasonic ultra-wide lenses at all.

This lens is designed to fill another important slot in any pro’s lens line-up, this time for a constant-aperture ultra-wideangle zoom. Where rival makers offer f/2.8 lenses, however, Panasonic has opted for a less ambitious f/4 design to achieve a more compact, lighter lens. Nevertheless the company claims “stunningly high” resolution, even towards the corners of the frame.

A double-magnet linear motor delivers high power despite its small size, and fast autofocus thanks to a 480 fps high-speed sensor drive that also features on the 70-200mm f/2.8 lens. And, like the new telephoto zoom, this lens has a quick action AF/MF focus clutch mechanism, suppresses focus breathing for video use and is dust and splash resistant.

The Lumix S Pro 16-35mm F4 will also be available in January 2020, and at a pretty reasonable price of $1,499, which might help to offset any disappointment over its modest maximum aperture.

That’s six lenses in total so far, and Panasonic says it will deliver 11 more, with the emphasis on the Lumix Pro range, by March 2021. According to Panasonic, counting other L-mount lenses from Leica and Sigma, more than 46 interchangeable primes and zooms in the L-Mount lens roadmap are available or will be available in the near future.

• These are the best Panasonic cameras right now
• We pick the best cameras for professionals
• Which are the best full frame mirrorless cameras?