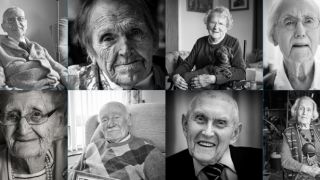 This month is Olympus' 100th anniversary, and it is celebrating its birthday in style. The company is producing an exhibition and celebratory book, filled with portraits of fellow centenarians born in 1918 and 1919.

Shot by a group of Olympus photographers and ambassadors, this exhibition will be held in Olympus' After Nyne art gallery in London and will be open to the public from 30 October to 05 November.

This project aims to "celebrate life, capturing a professional portrait for the family and to freeze time whilst collating memories and secrets to reaching this grand age to share with others."

Founded in October 1919 by Takeshi Yamashita under the logo 'Tokiwa', the company we now know today as Olympus specialized in the manufacturing of microscopes and thermometers. In 1936, Olympus launched its first camera, the Semi-Olympus I, which was fitted with the first Zuiko-branded lens.

#TBT for #Olympus100: Released in 1936, the Semi-Olympus I was the first camera produced by Olympus. The Mizuho Optic Research Laboratory was built in 1934 to develop the lenses for the camera, which is compatible with 16 exposures on 120 film. Olympus employees helped choose the name "Zuiko," meaning "light of the gods." Olympus America

In 1959, Olympus introduced the Pen series, which incorporated a half-frame format that allowed 72 pictures of 18 x 24 mm format on a standard 36 exposure roll of film. This made the Olympus Pen cameras compact and portable for their time. This focus on small and light cameras can be seen in Olympus' current digital Pen camera range as well.

Later, Olympus went on to produce the OM system, a full-frame professional 35mm SLR system designed to compete with Nikon and Canon. This OM system helped spark the trend towards smaller and more compact cameras and lenses.

When it was time for the digital revolution to hit the camera industry, Olympus helped lead the charge with an 810,000-pixel digital camera release in 1996, when the resolution of rival camera companys' offerings was less than half of that number. Olympus, in collaboration with Eastman Kodak, then went on to create the wildly popular Four Thirds system that so many photographers know and love today.

It's clear that Olympus has made an indelible mark on the photographic industry in its 100 years of innovation. Those that want to celebrate with Olympus can visit its exhibition at the After Nyne Gallery, 10 Portland Road, London from 30 October to 05 November.