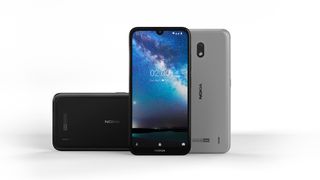 While the rest of the industry is engaged in an arms race for more megapixels at  higher price tags, Nokia has just released a new £99 / $139 camera phone that aims squarely at the entry level market.

The Nokia 2.2 is priced incredibly aggressively, but packs the latest advances in both AI photography and Android technology.

While it doesn't offer other popular options such as portrait mode, it does feature staples such as HDR shooting along with other Google Photos AI-powered options like Color Pop, Colorise and Beautify. The selfie camera is a more modest 5MP camera.

In terms of its core tech, the new Nokia features a 19:9 5.71-inch screen and is powered by a quad-core MediaTek Helio A22 SoC processor, comes with either 2GB RAM and 16GB storage or 3GB RAM and 32GB storage, and packs a removable 3,000mAh battery that lasts an entire day.

There is no fingerprint scanner, as the phone boasts biometric face unlocking – among the first phones in this category to carry the new tech. And Nokia is keen to point out that a printed picture of your face won't be enough to fool it:

"Unlike other handsets at this price point, the advanced AI driven face-unlock uses deep learning algorithms and liveliness detection for an accurate and spoof-proof experience."

A dedicated Google Assistant button can summon Google's genie for you without voice commands, and the Android One phone comes with Android 9 Pie and two years of OS upgrades (with three years of security updates).