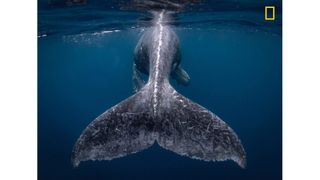 Exciting news for any fans of tremendous photography today as the esteemed National Geographic announces the winners of this year's Travel Photographer of the Year competition.

Describing her shot (above), which was titled ‘Mermaid’, she said: "Most of the time, the calf stayed close to her mom. At one point, the calf began jumping and tapping its tail on the water near us – it was very friendly and curious. Finally, the mother, who was watching nearby, came to pick up the calf and swim away. I fell in love completely with the calf and its very energetic, large, and beautiful tail."

As well as the title of National Geographic Travel Photographer of the year, Reiko also wins the Grand Prize of $10,000. Her shot, submitted in the Nature category – the others being 'People' and 'Cities' – was one of more than 13,000 images entered into this year’s contest.

Second place in the Nature category went to photographer Hao J, whose image of thousands of flamingos taking off from Lake Natron in Tanzania was taken from a helicopter.

Describing the shot, Hao said: "Before taking off, flamingos need to take a short run on water to build up some speed. At that moment, their long, red legs create a series of water ripples on the surface of the lake. Looking down from the helicopter, these ripple lines look like giant aquatic plants flowing in the water."

In the Cities category, the winner was another Japanese photographer, Hiro Kurashina, whose image was titled ‘Another Rainy Day in Nagasaki, Japan.’

"This is a view of the main street from a tram in Nagasaki on a rainy day," said Hiro. "The tram is vintage, but retrofitted with modern ticketing equipment. A conductor is no longer on board – only the lone driver. The quiet streetscape seen through the front windshield of the tram somehow caught my attention. This view presents quite a contrast to busy urban centers in Japan, such as Tokyo and Osaka."

In the People category, the winner was Alessandra Meniconzi, a Canon Explorer, whose image ‘Tea Culture’ was taken during a trip with a Kazakh family in Monogolia.

Alessandra said: "Tea for Kazakh is one of the attributes of hospitality. It isn't just a drink, but a mix of tradition, culture, relaxation, ceremony, and pleasure. Damel, seen here wrapped in heavy fur clothes, drinks a cup of tea to keep warm from the cold temperatures."

To see all the rest of the images, including the runners-up and People’s Choice winners, visit the National Geographic site. The competition is open to everyone, amateurs and professionals alike – so maybe we’ll be writing about one of your shots next year.

Read more: The 11 best landscape locations for photographers in the UK