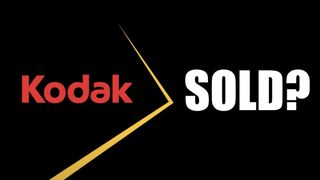 Following the recent sale of Olympus, there are rumors of another celebrated photographic brand has been sold to a private holding company. This time it's Kodak, whose film and chemistry business (Kodak Alaris) is being sold to a Chinese corporation.

That's according to a story by Inside Imaging, which reports that a proposed sale of Kodak's paper, photochemicals, display and software business was announced internally within Alaris on 07 July.

The report states that the buyer is Sino Promise Holdings, which also distributes Canon and Epson photo printers. According to Inside Imaging it is the largest distributor of Kodak Alaris in the world, supplying 8,000 retailers in the Asia Pacific and Russian territories, and it also manufactures chemicals and a number of paper and film stocks for Kodak (having acquired a factory from Alaris in 2016).

What's noteworthy is that Kodak's film business, which accounted for over a third of the company's revenue over the past year, is not part of the deal. The film unit has been merged with the Kodak Memories division (which comprises photo kiosks, online photo services and retail dye-sub printers), which was previously part of the proposed sale but ultimately was taken off the table.

"The KA insider told Inside Imaging that Sino Promise withdrew at the last minute from the sale of a much larger portion of Kodak Alaris due to concerns with the accounts of the document scanning business unit," states the report.

"We were told the now-abandoned project to sell the whole business cost Kodak Alaris’ owner, the Kodak UK pension fund, around US$30 million."

Also key to the deal is that Alaris holds the license to sell Kodak-branded products across various categories, which according to the report makes it "essentially a global marketing operation".

All of this appears to be the culmination of sale rumors that first surfaced in 2019, and is intertwined with Kodak's tortured history with splintered brands and pension plans following the collapse of the original business.

If you're confused, here are the crib notes: Kodak Alaris was founded in 2013, when Eastman Kodak filed for bankruptcy. To resolve a £2.8 billion claim by the UK Kodak Pension Plan (KPP), Alaris was formed with KPP as its sole shareholder to market Kodak-branded photographic and business products.

However, after closing its factory in 2016, Kodak Alaris no longer manufactures its paper, chemistry or film products; its key supplier is actually Eastman Kodak. And Alaris has nothing to do with cameras such as the Kodak Smile Classic, which is from Eastman Kodak. Though neither or them have anything to do with the whole Kodak cryptocurrency thing.

Kodachrome: 11 things we remember on the anniversary of its death
The best film cameras
The best 35mm film
The best photo printer: top regular and wide format photo printers
Kodak Smile and the best digital instant cameras on the market