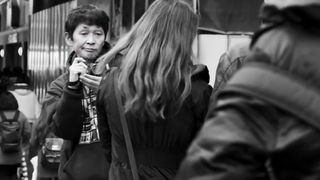 The conflict between art and privacy came to a head this week, after Fujifilm deleted a promo video for the upcoming release of the Fujifilm X100V (it has since been re-uploaded by a different channel and you can view it below). This video showed street and portrait photographer Tatsuo Suzuki walking around the streets of Tokyo and taking photos of strangers. While this is pretty par for the course with street photography, many people took umbrage with his specific technique.

Suzuki walks briskly along the street, suddenly leaning into the path of oncoming strangers, bringing his camera up quickly and taking photos. The reactions of the people photographed by him speak volumes. Many jerk away from him, and some even turn around in confusion and possible anger.

However, when his photos pop up on the screen you see the fruits of his confrontational labors. The people don't look angry or upset. Instead, it appears that Suzuki has captured a unique and beautiful moment in time.

Perhaps part of the problem with this video was that while it's easy to admire the results of a technique like this, people are rarely confronted with the reality of what it actually consists of. An arresting image of a woman caught off guard as she crosses the road can capture your imagination. But realizing that this photo was created by a man brusquely shoving a camera in her face might take away some of the initial romanticism for the viewer.

However, not everyone believes that the video should have been taken down. Tatsuo Suzuki's Instagram is flooded with comments supporting him, meanwhile forums all over the photographic corner of the internet are ablaze with fierce debate. Some argue that many of the great Magnum street photographers would have employed techniques like this, and without them doing so we wouldn't have the iconic images we do.

The street is simultaneously one of the most and least accessible subjects for photography. It is a melting pot of fantastically surreal situations, but it's also filled with subjects who not only haven't consented to what you're doing, but who might not do if they were asked.

Legally speaking (based on UK law, although other countries will vary), if someone is standing in a public place, then they have no reasonable expectation to privacy. This essentially means that street photography is perfectly legal. However, there is a line between taking photos and harassing strangers – and this video from Fujifilm seems to skirt right along it, dividing viewers as it goes.

There are ways to enjoy street photography without employing the techniques that Suzuki uses. A longer lens can enable you to capture photos without confronting your subject, or alternatively you can use a wide lens but take a step back, capturing a wider scene rather than a closer portrait.

However, would these techniques be capable of the enigmatic photos that Suzuki captured? Probably not.

As with many other forms of art, photography is rife with exploitation. From models being sexually harassed when shooting for world-renowned fashion photographers, to people living in third-world countries being turned into "poverty-porn", to endangered animals being raised for tourists to photograph and then being sold to canned hunting facilities.

Having a camera shoved in your face by a strange man obviously doesn't compare to these extreme instances, but perhaps it all feeds into a perception that the end result is ultimately what's most important. That the subject's thoughts, feelings and emotions during and after the shoot should play second fiddle to the final photo.

Perhaps there are questions we should ask ourselves before we pick up a camera: Is it worth it? Would we feel exploited if it was happening to us?

The problem is that these questions are subjective, and there will never be a consensus. Some people look at the discomfort Suzuki caused his subjects and say that his technique went too far. Others see his images and say yes, his technique is worth it for photographs like this.

And this is why we will never solve a problem like street photography. Because while art is subjective, it appears that street harassment might be as well.