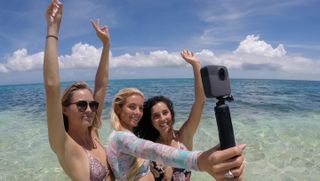 One of the best GoPro models in the range, the latest firmware for the GoPro Fusion gives the 360 camera a host of pro-friendly features – namely a huge resolution boost to 5.8K (which equates to 5.6K output after stitching the two hemispheres).

This big bump, up from the Fusion's previous 5.2K, follows a similar move by Rylo at the end of 2019 to boost the resolution of its own camera to 5.8K. GoPro, however, isn't stopping there with its latest update.

The new firmware, which is presently in its public beta phase, also introduces 24fps support for video, bringing the Fusion in line with the standard frame-rate for the film industry.

The 24fps extends to time-lapse video – a feature that benefits from an additional update in the form of raw photo shooting, rather than just jpg sequences. Both time-lapse and night mode benefit from raw support with intervals of five seconds or more.

Also in beta is an update to GoPro's Fusion Studio suite, which accommodates the new resolution and frame-rate options. It also adds improvements to the video stabilisation and the stitching quality of footage containing exposure mismatches, and now enables long clips to be split into chapters.

Fusion firmware v2.0 and Fusion Studio v1.4 can be downloaded from the GoPro website, along with updated GoPro VR plug-ins for Adobe Premiere and After Effects CC 2019.