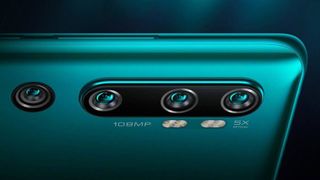 More than that, the Xiaomi Mi Note 10 / Xiaomi Mi CC9 Pro will possess a five-camera array, which the company is billing as "the world's FIRST 108MP Penta Camera".

At the heart of the phone is the 108-megapixel Samsung Isocell Bright HMX sensor,  which is the result of "close collaboration" between Samsung and Xiaomi – a resolution that actually outmuscles almost every camera on our list of 10 highest-resolution cameras you can buy today.

The HMX sensor features Tetracell technology that enables four sensors to combine like Voltron into a single photosite for 27MP images in low light conditions, and also supports video recording "without losses in field-of-view" at 6K resolution up to 30 frames per second.

The sensor is believed to be making its home court debut in the Samsung Galaxy S11 next year, with the Xiaomi Mi Note 10 being the first camera phone to feature the technology.

While little has been announced about this model designation in specific, by all accounts it seems to be the international name of the Xiaomi Mi CC9 Pro – which launches in China next week and about which we do know a few key details.

According to Gadgets 360, the main 108MP primary camera will be supplemented by a 20MP ultra-wide-angle camera with 117° field of view, a telephoto camera with a rumored 10x hybrid and 50x digital zoom, a macro camera, a 12MP portrait camera and a 32MP selfie camera.

With the device launching in China next week as the Xiaomi Mi CC9 Pro, we should have the full specs and details – and hopefully an international release date – for the Xiaomi Mi Note 10 very soon.

Of course, there's also the Xiaomi Mi Mix Alpha 5G due out in December – Xiaomi's 108MP concept phone with a wraparound screen that equates to a ludicrous "180.6% screen-to-body ratio".