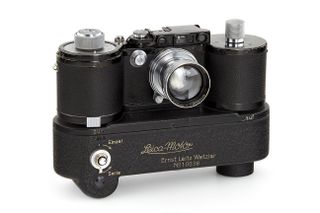 A collection of rare Leica cameras is being auctioned on June 8 in Germany. The star lots in the sale at Leitz Photographica Auction are three 35mm film cameras that have an estimated hammer price of between $300,000 to $500,000 a piece. So if you are thinking of getting all three, you are going to have to be prepared to fork out over a million dollars.

Mind you, these cameras are unlikely to break any records. Last year, the auction house, formerly known as WestLicht Photographica, sold a rare example of the Leica 0-Series produced in 1923 was for 2.4 million euros  (equivalent to more than £2.1m/$2.9m) and which is still the highest price ever paid for a camera sold by auction.

The final star lot is a Leica 250 Reporter GG with a Leica-Motor MOOEV. Designed to take special 10-metre rolls of film which could take 250 exposures, this is said to be one of the rarest and most valuable cameras manufactured by Leitz/Leica. It is estimated that only 15 of these cameras survive today. This particular camera offered here was delivered to Berlin in November 1942 and is in excellent condition with only minimal signs of wear.

A complete catalogue for the auction will be published on the Leitz Photographica Auction website in mid May. The auction itself will take place at Leica's headquarters in Wetzlar, Germany, on 8 june 2019.