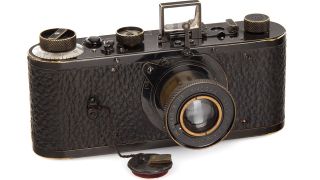 During the 32nd WestLicht Camera Auction at Vienna last week, a private collector from Asia appears to have set a new world record with the purchase of a Leica 0-series no. 122. With a finishing price of €2.4m (equivalent to more than £2.1m/$2.9m), it's believed to be the highest ever paid for a camera at auction.

The Leica 0-series 122 is one of only 25 limited edition cameras, which were manufactured in 1923. These were prototype cameras, produced by Ernst Leitz before Leica cameras officially went on sale, in order to test how well the market would receive them. The answer, if you’re interested, was 'very'.

The camera was reportedly in excellent condition, with all original parts intact, including the paintwork. Also included were the matching lens cover, as well as the unique film spool and take-up spool.

The 0-series 122 wasn’t the only camera to fetch a tidy price at this recent round of auctions. A Hasselblad Lunar Surface SWC, which was manufactured for the Apollo missions, sold for the comparatively measly sum of €480,000. The auction house wrote a brief blog on the sales.

So, if you’ve got a spare £12,500 burning a hole in your wallet, it might be worth picking up one of those Stealth Edition Leica M Monochrom models, which have also been produced to a limited quantity. Give it a century and you could be sitting on a fortune.