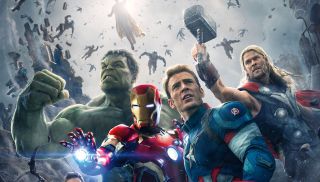 With the arrival of Disney Plus, the new Netflix-rivalling streaming service from the house of mouse, almost the entire Marvel Cinematic Universe (MCU) can now be found in one place. And not only did seven Marvel movies feature Canon cameras, 5 of them actually had footage shot on the Canon EOS 5D!

Additionally, Ant-Man and The Wasp was also shot in part using Canon bodies. However, this feature won't be arriving on the service until July 29, 2020.

While no Canon cameras were used for principal photography on any of the films (which were predominantly shot on Arri systems), everything from the Canon EOS 7D to the Canon EOS C300 was used for additional photography, visual effects shots and crash cams. (The following information was sourced from Canon USA and Premium Beat…)

"One of the problems with doing action stuff is finding interesting places to put the camera," Jonathan Taylor, Iron Man 2's second unit director of photography, told The ASC. [we] actually put the 5Ds on the cars we were going to crash. We cut holes for the lenses in small Pelican cases that we painted to match the cars. We got some amazing shots. Of course, it’s not film quality, but for a 12-frame cut in an action piece, it holds up very well."

The Canon EOS 5D Mark III, meanwhile, was only featured in Ant-Man, though the humble Canon EOS 7D rather punched above its weight by being used in the original Avengers entry.

Its sequel, Avengers: Age of Ultron, featured a true cinema camera, the Canon EOS C500. And Iron Man 3 made use of the Canon EOS C300 for some of the film's extensive visual effects shots.

"Six Canon EOS C300 cameras served as ‘witness cameras’ for accurate close-up tracking of stunt actors’ movements," it was noted by Canon USA. "The footage captured using Canon EOS C300 cameras was then used by visual effects facilities as a reference to convincingly overlay photorealistic CGI of Iron Man armor, and other imagery, on to main-camera footage."

Even so, that makes Canon the joint-second most popular camera brand used in the MCU with eight films, sharing the silver medal spot with Panavision and Phantom, behind only Arri with twenty-three films (and ahead of Red with seven films).

And, astonishingly, the Canon 5D is the joint-third most used camera for additional photography, with it and Arri Alexa Mini at five films, compared to seven for the Red Epic / Weapon and eight for the Phantom Flex.

So when you're binge-watching the Marvel Cinematic Universe, keep your eyes peeled and see if you can spot which shots were filmed with a Canon! You can sign up to Disney Plus here, complete with a free seven-day trial. The new streaming service, which offers a huge back catalogue of movies and shows from Disney, National Geographic and others is now available in the USA, Canada, and The Netherlands.