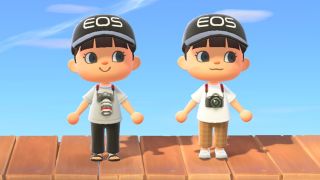 Whether you've already pre-ordered a Canon EOS R5 or you're eager to try one out in camera stores, you'll still have to wait until the end of July to get your hands on one. Until then, the closest you can get to an R5 is in the blockbuster Nintendo game, Animal Crossing: New Horizons.

Canon Japan has released free Creator Codes that enable you to download and wear a number of cameras around the neck of your in-game character – including the Canon EOS R5, the Canon EOS M50 and even the Canon AE-1, which of course is one of the best film cameras ever made.

Even if you're not a gamer yourself, you've probably heard about Animal Crossing through your kids or social media, as it was released for the Nintendo Switch console right at the beginning of the COVID-19 lockdown.

The social simulation game became an immediate runaway success, enabling you to do things that lockdown prohibited, such as meeting friends and traveling to far-off islands. It even features a Photo Mode, an increasingly popular pastime for both gamers and photographers, affording you the chance to run around taking pictures and even set up virtual photography photo sessions.

It's only fitting, then, that Canon has made it possible for you to wear a selection of its most popular cameras in the game. They are only part of your outfit, of course, so you can't really 'use' them and they aren't objects that you can place or display in your virtual home. (Note to Canon: talk nicely to Nintendo, because it would be great to have an in-game camera shelf!)

Trust us, though: dressing up your avatar is a key point of Animal Crossing, so even if you think this is a bit daft, millions of people are going to be downloading these outfits… including the Digital Camera World editor!

Hands on: Canon EOS R5 review
Canon EOS R5 vs R6: What are the differences and which is best for you?
The best Canon camera: Canon's DSLR, mirrorless and compact cameras