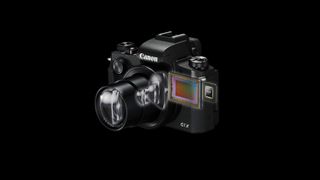 Canon is well known for its EOS interchangeable-lens cameras, but it also makes compact, or ‘fixed’ lens cameras for beginners, intermediate users and expert photographers who want a cheaper or more portable camera.

These fall into two main product ranges: Canon’s Ixus model, which are designed as simple, pocket-sized, fashion-conscious snapshot cameras, and the PowerShot range, which offers the biggest range of features for more advanced photographers.

PowerShot cameras themselves come in two main types: the SX series and G series. There is also a PowerShot D30 underwater camera, but this is a bit of an outlier which was launched way back in 2014 and shows no signs of being replaced now.

The SX-series cameras are characterised by long-zoom lenses and small 1/2.3-inch sensors. This allows long zoom ranges in compact and affordable camera designs.

If you want a pocket-sized camera for travel, for example, the PowerShot SX740 HS fits the bill. Despite its slim body it packs in a 40x zoom lens, which makes it very versatile.  It also shoots 4K video and has a tilting touchscreen display.

But if you’d rather an even longer zoom and don’t mind a larger camera, there’s the new PowerShot SX70 HS, which has a massive 65x zoom, articulating rear screen, 4K video and raw capability.

There are many other PowerShot SX models in and around these two, with different combinations of features, zoom range and price point. They all have one thing in common, though – the small 1/2.3-inch sensor format. This restricts image quality, especially at higher ISO settings, and will this will quickly rule them out for quality-conscious ‘serious’ photographers.

The best travel camera in 2018

This is where Canon’s more upmarket PowerShot G series comes in. All of the G-series cameras have much larger 1-inch sensors, which brings a substantial improvement in image quality, and the top model – the G1 X Mark III – has an even larger APS-C sensor the same size and quality as those in Canon’s APS-C DSLR and mirrorless models.

The G5 X is perhaps the most interesting right now. This has the very good 4.2x zoom lens of the G7 X Mark II but adds an electronic viewfinder on the top of the camera. It’s like carrying around a tiny DSLR that you can fit in a coat pocket.

Next up is the G3 X, which has an impressive 25x zoom range but it actually a bit of a dud compared to other bridge cameras on the market from Sony and Panasonic, mainly because you need to pay extra to get an optical viewfinder and because its autofocus and burst shooting modes are pretty sluggish.

But the G1 X Mark III at the top of the range is very good indeed. The image quality from its 24-megapixel APS-C sensor is excellent and its retracting 3x 24-72mm equivalent lens offers a useful zoom range. Its one disadvantage is its relatively modest maximum aperture range of f/2.8 at the wide-angle end to f/5.6 at full zoom.

This is the one compromise with the larger sensors in Canon’s G-series compact cameras. You get a big boost in image quality, but you can’t get the extra-long zoom ranges of the PowerShot SX series cameras.

On balance, though, we’d always recommend sensor size over zoom range. If you definitely have to have an ultra-zoom lens, the PowerShot SX series makes some sense, but it’s the PowerShot G series that offers the quality. For most photographers an ultra-long zoom range is something you’ll need only rarely, but a higher level of image quality is something you’ll appreciate all the time.

Canon PowerShot SX70 HS hands on review: We like the SX70 HS’s zoom range and DSLR feel, not to mention its 4K video and raw shooting capability, but we don’t see it as a match for a DSLR.

Canon PowerShot G1 X Mark III review: Canon has done an amazing job cramming an APS-C sensor into a camera this small and making its lens retract into the camera body, but it is pricey.