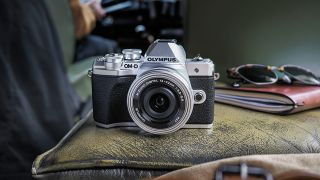 It’s been three years now since the first iteration and we're now on the third model. In the following article, we look at the key differences between the Olympus OM-D E-M10 Mark III and E-M10 Mark II that it updates.

As we would expect, the OM-D E-M10 Mark III benefits from Olympus’s latest and greatest processor, the TruePic VIII. It’s the same processor as found in the flagship OM-D E-M1 Mark II.

So what improvements does the new processor bring? Well, there's 4K video recording, which is the biggest change without a doubt. Burst shooting and autofocus has also improved – more on that below.

At 16.1MP, the pixel count for full-resolution images is the same as before, although Olympus claims that low-light performance has improved from the Mark II.

Put simply, you can get a sharp shot at 1/8sec in a same situation where 1/125sec would be your minimum shutter speed for the same clarity. This same stabilisation transforms handheld video recording too, with shaking caused by movement reduced.

A smaller change between the two here is that the image stabilisation system on the newer model is automatically able to detect which mode you need and adapt itself to the situation accordingly. On the OM-D E-M10 Mark II, this needed to be adjusted manually.

The most significant upgrade in the E-M10 Mark III is that it can record 4K videos up to 30fps, with an impressive bitrate of 102Mbps.

While the video resolution has been improved for the new camera, neither a mic input nor headphone output feature in either. This is somewhat typical for a model of this level, although a handful do now sport headphone ports.

The continuous high burst mode has increased from 8.5fps to 8.6fps, which isn't a difference you'll notice.

Both cameras have a burst depth of 22 frames when shooting Raw files, which is just shy of three seconds. It seems the buffer is not improved for the new camera.

When the camera is set to continuously focus on a subject, this frame rate drops to 4.8fps on the O-MD E-M10 Mark III. On the OM-D E-M10 Mark II, meanwhile, this was 4fps.