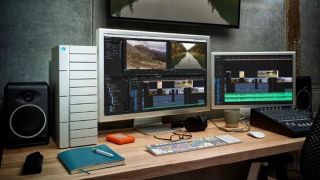 The classic criteria for data storage have been capacity and reliability – space for now and for the foreseeable future, and automatic back-up, not a manual method that can be neglected, but complete protection against hard-drive failure or malfunction. We need it set-and-forget, and we need to trust it.

But as standards have progressed and file sizes have risen, speed has become ever more important: speed of writing when we’re dumping the contents from a card of 4K video; speed of reading when we’re searching and playing back. For real-time viewing of final content – videos and movies in particular – we need the ability to serve that data to the point of consumption without the constrictions that lead to buffering.

And in the age of videography, speed has become crucial for more than recall; it is part of the creation process itself. Editing video — especially 4K and now moving on to an 8K world — requires the ability to play multiple video streams simultaneously from potentially enormous files. Best results are obtained by shunting all files for a project onto the computer hard drive ready for editing, but that’s increasingly impractical and slow with the ever-larger files generated in a world of 4K video. Yet what external hard drive interface is fast enough to deliver reliable speeds through an external connection?

The answer may be Thunderbolt 3, which not only offers advantages in sheer speed, it was designed from the ground up by Intel and Apple to combine DisplayPort and PCI Express into a single connection, able to chain both data storage and high-res displays without loss of data throughput.

While USB is not designed for high-performance graphics input-output, Thunderbolt is a low-latency and high-bandwidth interface, the integration of PCI Express allowing connectivity between computer, external graphics card units, displays and storage in a sequence or ring arrangement. And while USB looked for a while to be offering advantages in universality over the earlier versions of Thunderbolt, the latest Thunderbolt 3 has incorporated USB 3.1 and uses the USB-C connector. Any Thunderbolt 3 port works as a USB-C port. Though it’s important to remember this isn’t true the other way around; USB-C equipment doesn’t deliver the advantages of Thunderbolt 3.

LaCie’s Thunderbolt 3 solutions come in two-drive, six-drive and 12-drive sizes. Even the largest of these (right) is impressively compact in terms of footprint, built vertically so it takes up less desk space than, say, a Macbook Air. They use aluminium enclosures able to dissipate heat better than plastic, and the larger units have thermoregulated fans, though even these have built-in redundancy, so that one fan fail won’t put the LaCie 12big or 6big out of operation.

Meanwhile the 2big design comes in two varieties. The Thunderbolt 3 version is a ‘Dock’ design which has a selection of helpful ports and card slots, with photographers benefiting from front CF and SD card slots which allow direct and rapid transfer of files from DSLR, GoPro or drone. Or there’s the 2big RAID, which keeps things simple with design, and offers USB-C without the significant Thunderbolt 3 advantages.

While USB-C can be the easier choice for Windows, and for keeping ancillary costs such as cables down, if you’re aiming to handle high-def video speeds, go with the more professional solution of Thunderbolt 3. Don’t, however, be overly duped by theoretical maximum speeds. USB-C/3.1 standards may theoretically deliver the 10Gbps of the original Thunderbolt 1 standard, while Thunderbolt 3 can theoretically handle 40Gbps over short cable runs. Both designs of 2raid quote 440MB/s, even then noting that “actual data rates may vary”.

The stacked 12big Thunderbolt 3 is the ultimate in the range; 12 bays, so 96TB of storage if loaded with Seagate’s IronWolf 8TB enterprise-grade hard drives, but with space for up to a massive 168TB if 14TB drives are used. Indeed with Thunderbolt’s inherent chaining design, Thunderbolt 3 lets you daisy-chain up to six devices to a computer through a single cable, so you could connect six LaCie 12bigs together — one petabyte of storage.

For video fiends, the highlight here may be the speeds available, LaCie claiming to have squeezed out speeds up to 2600MB/s from those 7200rpm IronWolf drives. Uncompressed HD 10-bit and 12-bit video previewing? No problem. RAW cinema-level footage to back-up? It’ll suck it in. And for that video editing scenario, Thunderbolt 3 lets you daisy-chain dual 4K displays to the LaCie 12big or 6big, even a 5K display. With the dual 4K solution you could dedicate one display to previewing footage and the other to a timeline.

Those IronWolf drives are specified for 24×7 reliability; they’re covered by a 5-year warranty, and 2big includes Rescue Data Recovery Services lasting the length of that warranty, replacing your drive and recovering your files with one in-lab data recovery service at no additional cost.

But you don’t want to go through the recovery process. RAID (redundant array of independent disks) keeps your data automatically backed up on the other disks, though of course this uses up some of your capacity.

The advantage of having so many drives in the 12big (or 6big) is that RAID-configuring your drives to back up each other is less wasteful of space.

On a two-drive 2big, RAID 1 makes the second drive into a copy of the first; you’re fully backed up automatically, but your storage capacity is halved. But RAID 5 uses three or more disks, and the maths works out at a storage efficiency of 1 minus 1/n, where n is the number of disks. So you basically lose the capacity of one of however many disks you start with for the back-up process. With three disks (the minimum for RAID 5), you’d lose a third of your total disk capacity. With 12 disks, then, you lose only a twelfth, of 8.3%. From 96TB you’d come down to 88TB. Luckier, really.

So any single drive can fail with no loss of data. How do you know? There are indicator lights on the drive slots, but also LaCie’s RAID Manager program makes it easy not only to configure any ‘big’ product for data redundancy but to monitor the system’s health. If there’s trouble, you’ll get an email.

Thunderbolt 3 offers a professional level above USB 3.1 and USB-C, and LaCie’s ‘big’ range harness its abilities to the maximum, both for speed of operation and reliability of data storage. It’s as bulletproof a localized storage solution as one can imagine, and for anyone working in the 4K video space on a Mac, it could revolutionize your ability to edit multiple streams at once, without the swearing.