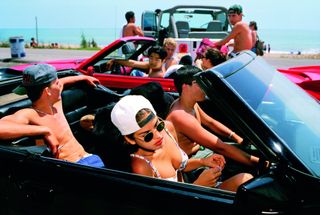 [Above] Mijanou, 18, who was voted Best Physique at Beverly Hills High School, skips class to go to the beach in Santa Monica, 1993.

Lauren Greenfield was trawling through her archive of more than half a million images, taken over the past 25 years, when one picture made her stop in her tracks. Staring straight down the lens is a 12-year-old Kim Kardashian. Standing around at a school dance with her sister Kourtney, she’s instantly recognisable; beautiful, not in the glossy way she is now but fresh-faced, with a nonchalant style that feels ever so 1992. “I had discarded it because she wasn’t important at the time,” recalls Greenfield, “but because of the rise of reality TV and celebrity and because the aspiration to affluence became important in my work, she became a cultural touchstone.”

The Kardashian picture appears in her Generation Wealth book, published in May by Phaidon. It’s just one example of how the full implications of her work became clear to Greenfield in retrospect. “With the crash in 2008, I realised that a lot of the stories I’d been telling since the ’90s were connected,” she explains over the phone from LA, where she’s in the middle of installing her ‘Generation Wealth’ exhibition at the Annenberg Space for Photography. “Stories about excess, our unquenchable thirst for acquisition, the addictive quality of consumerism… The crash turned it into this morality tale that had international repercussions.”

Over the next eight years Greenfield painstakingly went back through all her work together with curator Trudy Wilner Stack, and began to re-frame the story. The book went from 300 pages to 500 pages as she weaved well-known projects in with previously unpublished work and new series shot in China, Russia, Dubai and Iceland into chapters titled ‘The Princess Brand’, ‘Sexual Capital’ and ‘The Cult of Celebrity’, among others. A chronicle of what Greenfield calls “the influence of affluence”, Generation Wealth brings together some 650 images from projects ostensibly about different things – child beauty pageants, eating disorders, the sex industry, youth culture. Their major unifying theme: our obsession with money and what we’ll do to get it.

“I can in hindsight track a straight line from the rise of Gordon Gekko to the rise of Donald Trump, from the beginning of marketing to kids that starts in the ’80s and ’90s to kids today marketing themselves on social media. From the early precocious sexualisation of girls, also in the ’90s, to the rise of major celebrities such as Kim Kardashian through sex tapes,” Greenfield says.

“I’m really influenced by the economist Juliet Schor and the idea of a vertical reference group. We used to compare ourselves to our neighbour – the neighbour who maybe had a little bit more than we did. With the rise of TV and as our communities have broken down, keeping up with the Joneses has become keeping up with the Kardashians. You’re comparing yourself in a really unrealistic way to wealthy people. It’s not even something where you think hard work will get you to that place. It’s living in this fantasy world.”

Greenfield first shot to international acclaim in 1997 with the publication of her debut book Fast Forward: Growing Up in the Shadow of Hollywood, a now seminal visual study of young people coming of age in image-focused LA. Those were the heady days of MTV and gangsta rap, when South Central kids aspired to bling, while their rich Bel Air counterparts copied their baggy clothes and stole their slang. It captured the sudden self-consciousness of that time as youth culture now flowed across socioeconomic boundaries through mass media – something that has only become more pronounced with the internet.

Other projects followed: Girl Culture (2002) looked at young women’s relationship to their bodies, THIN (2006) explored anorexia and was also a feature film. Plus there were regular assignments for publications such as The New York Times Magazine and The Sunday Times Magazine. After THIN came two more short films – kids + money and Beauty CULTure, before the 2012 feature documentary The Queen of Versailles about how the crash hit billionaires David and Jackie Siegel, which earned Greenfield a swathe of accolades, including Sundance’s Director Award.

Always unstaged but with a dynamic energy that comes from the subject’s own exhibitionism, their insecurities, Greenfield’s portraits are fiercely memorable. Who can forget the young girl clutching her cleavage on the cover of Girl Culture? Or those tiny, lipsticked beauty queens? While the worlds she presents are often gaudy or extreme, the pictures never feel exploitative. There’s a respect for her subjects. “You have to develop those relationships, you have to understand people’s point of view, what makes them tick – that gives them the humanity to allow you in and trust you to tell their story,” she says. “A lot of times I’m walking that line where the decisions that individuals are making make sense in the context of the culture, but I still want to be able to take a step back and critique the dynamics.”

Perhaps this ability to empathise and also observe people from across the social spectrum comes from Greenfield’s unconventional background, which accustomed her to contrasts. In the introduction to Generation Wealth she talks about her bohemian childhood in communes, a year in France aged 14 hanging out with the adolescent kids of aristocratic old families, before returning to the US to attend Crossroads, a private high school in Santa Monica, alongside the teen children of Hollywood hotshots.

Greenfield enrolled at Harvard in the mid ’80s to study social sciences but switched to visual studies after a nine-month documentary film course, which took her all over the world and convinced her that culture was her calling. On the merit of her final year project – a series about the French aristocracy – she gained a coveted internship at National Geographic and then a professional assignment for the magazine, documenting a Zinacantec Maya village in Mexico. However, Mexico left Greenfield feeling she had more to say closer to home. So she went back to Crossroads to start shooting what would become Fast Forward.

Influenced by her anthropology training, Greenfield has always incorporated interviews into her practice. “I was originally doing interviews for research – to figure out what I should shoot, what was important,” she says. “A lot of times the subjects really help me to figure out and unpack the story.” Many of her subjects show surprising self-awareness. In particular Greenfield remembers a 13-year-old who featured in Fast Forward, Adam. “First he said that you have to spend $50,000 on a bar mitzvah or you’re shit out of luck and then he said money ruins kids – he felt money had ruined him,” she says.

These interviews feature throughout Generation Wealth, alongside the pictures. “In the beginning they were written, then they were on audio tape and then they were on high def and now they’re on 4K,” she says, pointing to a progression inspired as much by changing technology as by her growing interest in moving image. “I switched in 2004 to digital and never looked back. Digital has got high quality, bigger and bigger resolution… That’s transformed my photography.” If she were starting her career now, she might well have gone straight into film making, she says. “The photojournalism that nurtured a lot of this work doesn’t exist any more. In film I have the resources to spend the time that I need to tell these stories. To be the journalist, to be the investigator. In the photojournalism world, assignments have got shorter and shorter. The work has become more illustration than in-depth, embedded journalism.”

“I also think the way we impact the world has really changed,” she continues. “When I was starting, everybody read The New York Times Magazine every Sunday and having a cover on the British Sunday Times Magazine was a life-changing event – it was incredible. Now magazines don’t feel as central to the way we get our information. When I made the viral video, #likeagirl, for Always, that was eventually seen by 214 million people. That’s where the impact is these days – people sharing things on the internet. Even in the heyday of magazines that kind of impact was not possible for a photographer. Since [my] work is also about communicating and making a difference, I want it to be accessible to people.”

In a way, Generation Wealth feels like a summing up, but Greenfield assures me she has no plans to bow out yet. “It’s funny because this is really a thematic retrospective, it’s not a [conventional] retrospective. I felt like it’s important narrative and now is the time that this statement needed to be made.”