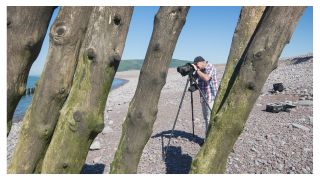 As we drive along the twisting Exmoor road that leads down to Porlock Weir, Jeremy Walker explains why he has chosen this spot for our one-day shoot.

“I have been to Porlock Weir about three times before, and there are a couple of spots here that I still want to recce,” he explains.

“This location is not as well-known as the Jurassic Coast, which I shoot a lot, but that is best photographed at a different time of year. Most of the cliffs and beaches are south-facing, so are in shade at sunset.”

“The small harbor here is picturesque, and the pebble beach has some beautiful wooden groynes that suit Big Stopper long exposures. With the beach facing north-west, it is lit the whole day at this time of year. It is not overrun with tourists, even in the height of summer, which is another bonus.”

Tide times are the most crucial factor for this location – this part of the Bristol Channel has one of the biggest differences between high and low tide in the world. We needed to be set up on the beach for the hour or two before high tide, which today was at 5.28pm. (Jeremy uses Tide Times.)

It was now 1pm, so we had plenty of time to explore, and talk technique.

Although he’s best-known for his landscapes, Jeremy has not always been a scenic specialist. After studying photography at Gloucester College of Art, his aim was to become an advertising photographer.

The reality was that he ended up shooting commercial and industrial subjects. “I shot lots of shoes, photographed plenty of college prospectuses, and toured the country photographing countless bus shelters,” he reminisces.

When Jeremy set up on his own, he diversified into shooting landscapes and, when times were quiet, stock images for big picture libraries.

Although shooting stock used to make up a significant proportion of  Jeremy’s commercial work, more than half of his income now comes from workshops and private tuition. “This is supplemented by private sales of prints and commissioned work.”

His latest venture is a book of images of ruined castles and other buildings shot within their landscape – it will combine around 100 old and new images.

Behind the scenes on a landscapes shoot with Jeremy Walker

Sunset was not until 9.34pm – and as the previous evening had produced a spectacular sunset, we were hoping that today would be the same.

“Professional landscape photographers have a reputation for just shooting at dusk and dawn, but as long as you avoid the middle of the day, you can still should be able to get good shots in the morning and afternoon,” says Jeremy.

But with a windless heatwave of a day supplying endless blue sky and no clouds, nothing was going to be easy.

After a tour around the boats in the harbour, made possible by the low tide, and a check through everything in the shade of the local hostelry, it was time to head to the beach.

Despite the heat, Jeremy recommended wearing walking boots to make it easier to walk across the large, click-clacking pebbles of Porlock Bay. Several lines of groynes make it possible to move from one set to the next as the tide comes in, covering one series of posts, and pushing up the stone bank to the next set of pillars.

Using a medium-edged three-stop 0.9 graduated filter, as well as the 15-stop Super Stopper ND, each exposure took four minutes, allowing Jeremy to maximise the amount of blur he could get in the water, and from the occasional cloud.

With in-camera noise reduction adding a further four minutes to the processing of the exposure, we had to move and recompose after every shot.

After yomping back to the village to pick up torches, we were back at the salt marsh with just under an hour to sundown. It was an anxious time – on several occasions we were certain that the sun would disappear behind a bank of cloud that was beginning to build on the horizon.

At 9.15, however, we got the first signs of a decent orange glow in the sky, and by 9.20pm things were richening up nicely. It felt like all our effort had been nicely rewarded – particularly as the cloud was blurring beautifully with the eight-minute exposures that Jeremy was setting up with the help of his Big Stopper.

How time makes a difference to filtered images

Time to pack up, then. But just as we were about to set off back to the car in the twilight, we noticed a new purple patch in the sky… And what’s more, this colour was now being reflected in the clouds behind us.

Jeremy scurried to get back in position, as the sky turned an amazing psychedelic mauve. No Big Stopper was needed now – just a 0.9 hard ND grad to ensure that there was still some detail in the marshy foreground as he shot.

As we headed back up the country lane out of Porlock Weir, it was 11pm. But we had found a new location, and used it with great success, in the same summer’s day. Result.

1. Nikon D850. “This is my main camera nowadays, but I also carry a Nikon D810 as a backup. Each body has a Kirk L-bracket on it – for fast attachment to my Arca Swiss tripod head, and allowing me to quickly change from landscape to portrait formats. I carry four spare batteries with me, so tend to leave the charger at home.”

I use the 0.6 grad the most, so I carry a spare: it is easier to swap than clean if it gets covered in salt spray.

4. Matin LCD Viewfinder loupe. “This is essential on a day like today. It allows me to check my shots on the LCD screen in bright sunlight. It has a neckstrap, and offers a 2x magnification."

Getting all set for a Big Stopper

With ND filters you need to have a disciplined approach, to ensure you do everything right so that your super-long exposures come out right first time.

With each shot requiring minutes to take, you don’t want to waste one with a careless mistake. These are the steps Jeremy uses…

Lee Filters makes three densities of ND filter, and Jeremy carries all of them around for him to create his signature long-exposure shots. But which does he use and when?

“This is my first choice for long exposures – ideal for creating milky water and blurring skies”.

“I use this when it is a very bright sunny day – such as today – so I can still get exposures that are minutes long”.

“I use this for fast-moving water – for waterfalls, or when there are waves crashing right in front of you – so that the water is not too milky”.

The long exposures needed with a Big Stopper can mean light leaking in places that you don’t usually expect. Jeremy has found that the focus distance window on some lenses can even leak in light.

To cover everything, Jeremy now uses a custom-made dark cloth – a piece of leather with Velcro fastening, which he can wrap around the lens and camera. Not only does this stop light leaks, it protects the setup from salt spray.