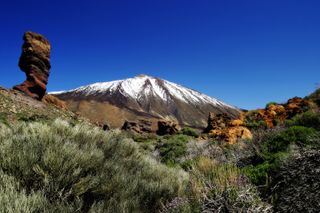 Is there anything better than a day spent in the wild with a tripod, a camera and a pair of hiking boots? Europe may be some of the most urbanised regions of the world, but between the big cities are some of the world’s most precious, most dramatic and most protected wild areas. Here are just a few of the must-do national parks and wild areas in the UK and Europe that should be high on every landscape photographer’s bucket list, and are some of the best places for photography in the world.

With Skógafoss and Seljalandsfoss waterfalls, the black sand beach at Reynisfjara, Jökulsárlón Glacier Lagoon and endless lava fields, southern Iceland has hit after hit for landscape photographers. However, the lesser known Vatnajokull National Park really stands out. Its key area is Skaftafell, a wilderness dedicated to hiking that includes several incredible waterfalls and some even more jaw-dropping ‘finger’ glaciers whose scale are hard to fathom. As well as getting a close-up of some glaciers, it’s possible to walk to the marvellous Svartifoss – the Black Falls – where the meltwater from the Svinafellsjokull glacier flows down in front of hundreds of dark lava hexagonal columns. The walk to Svartifoss takes about an hour. Take a wide-angle lens.

The UK's only coastal national park is a landscape photographer's dream destination. Iconic beaches, bays and inlets include Broad Haven South, Manorbier and Tenby, while geological wonders include the Green Bridge of Wales and Stack Rocks. However, no trip here is complete without visiting the island of Skomer (either as a day trip or to stay overnight), which is home to half the world's population of Manx shearwaters and the largest Atlantic puffin colony in the U.K. If you have the time, the 186-mile Pembrokeshire Coast Path offers the most breathtaking coastal scenery you'll ever see.

A hugely underrated area, the French Pyrénées in the department of Hautes-Pyrénées, southern France, provides incredible photographic opportunities in all seasons. Don't miss the Cirque de Gavarnie, an excellent hiking area featuring La Brèche de Roland (a dramatic natural gap in the rock) and the tiered Gavarnie waterfall. However, the highlight has to be Pic du Midi, an incredible high mountain-top observatory that looks like something out of a James Bond film. A Cold War-era build, a military installation, and several telescope domes painted to look like a Stormtrooper's helmet makes Pic du Midi worth visiting, but it's the vistas from its observatory deck that are worth setting up a tripod for. It’s reached by cable car from the La Mongie ski station. Nearby is the Col du Tourmalet, the highest paved mountain pass in the French Pyrénées made famous for its part in the annual Tour de France cycling event.

They may be famous in the UK as cheap holiday destinations, but the Canary Islands – among them Gran Canaria, Fuerteventura, Lanzarote and La Palma – offer unique natural. They're all volcanic, and some of them have very high altitude areas dotted with some of the world's most important telescopes. Tenerife is the most dramatic; its Teide National Park houses a massive volcanic peak, El Teide, that's usually covered in snow. A hike up to it is a must-do (if you're lazy, take the cable car), though even below the peak the moon-scapes of lava fields and rock formations make it a playground for landscape photographers. The area is also a Starlight Reserve, and a favored destination for photographers during meteor showers.

A vast mountain range in the eastern Scottish Highlands, the Cairngorms is home to some of the highest, coldest and snowiest areas in winter. If that's when you visit, you can ski at the Cairngorm Mountain ski area near Aviemore. Close by is also where you'll find the only herd of reindeer in the UK However, you come to the Cairngorms not for any of that, but for light; the area has a quality of light that is impossible to beat in the UK. Iconic lochs include Loch Garten, Loch an Eilean, Loch Gamhna, Loch Pityoulish, and Loch Morlich.

Although only Koltur – one of its 18 islands – is even scheduled to become a national park, no list of Europe's wild paradises for landscape photographers would be complete without mentioning the unique beauty of the remote Faroe Islands. An archipelago between Scotland, Norway and Iceland in the north Atlantic, the Faroe Islands contain everything from cliffs and craggy coastlines to mountains and fjords, with highlights including the drop-dead gorgeous Gásadalur waterfall, Mykines island (where you'll have puffins at your feet), and the chocolate box villages of Saksun and Gjogv. Indeed, a photographic highlight is the local custom for brightly-coloured houses with turf roofs. Set that against an iced-up fjord and it's hard to go wrong.

Welcome to the land of lakes. Tourism to Croatia has skyrocketed in recent years, and Plitvice is one of the main reasons. However, it's still quiet enough to be a photographic playground if you aim for late spring or autumn, and get up early each morning. Its 16 turquoise lakes are each connected by waterfalls and cascades, which will give you lots of practice at perfecting 'milky water' techniques. Given UNESCO World Heritage status in 1979, Plitvice is divided into two areas – upper lakes and lower lakes – that meet at Lake Kozjak.

The vast majority of Svalbard, a landmass in the Arctic Ocean at a shivering 78° N degrees North, is protected land. Its glaciers, tundra, mountains and snowy landscapes might be safe from destruction, but it's not safe for you; there are more polar bears here than humans here (so carry flares and rifles). However, it's worth the risk, especially if you have light on your side, either in the form of the Midnight Sun in summer (for 24 hours of continuous daylight), or the Northern Lights during the dark winter (there's 24 hours of continuous night in December). Svalbard is most easily visited on a cruise, with hikes and boat trips usually thrown in.

How about photographing the he largest glacier in mainland Europe? Photographers come to Jostedalsbreen National Park in west Norway to capture the captivating blue ice of Jostedalsbreen Glacier, its snout appearing to inch dramatically down steep slopes. However, a hike to the area's barren high mountain landscapes is also not to be missed. With incredible fjords, glacial rivers, lush green valleys, and dramatic waterfalls, and you'll be wishing you brought more SD cards.

Strictly speaking, this area of vast man-made reservoirs and forests in mid Wales is not an official national park. However, despite being privately owned by Dŵr Cymru Welsh Water, it's such a playground for photography that the 'Welsh Lake District' had to make our list. You could quite easily stop at Caban Coch Dam near the entrance, set-up your tripod below the crashing water overspill, and never leave, though Craig Goch (and its island) and remote Claerwen dam further on are both incredible destinations for landscape photography. Add a few remote churches and some Victorian pumping stations, and it's heaven. If you're into astrophotography, prepare to be amazed by the night skies above what's also called the Elan Valley International Dark Sky Park.