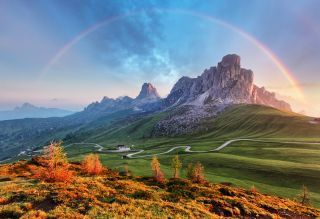 Remarkably diverse, fragile, and threatened. That's how to sum-up the 1,092 unique UNESCO World Heritage Sites dotted across the world on every continent except Antarctica. Most are on the list because of their cultural significance, some are natural wonders, but all of them have one thing in common; they're fabulous locations for photography that any photographer should consider visiting.

These places are so much a list of some of the most photogenic places on earth so that the ever-growing list of UNESCO World Heritage Sites is something of a bucket list list for many photographers.

Here's a tiny fraction of the sights on offer … just make sure you get there early before the crowds arrives.

The hunt for a reflection. That's what any trip to photograph one of France's most iconic places is all about. On an island just off the northwestern coast of Normandy, there is a causeway that links it to the mainland. Note that it's therefore rarely surrounded by water; that happens only during spring tides 36 to 48 hours after the full and new moons (it's got the highest tides in continental Europe, so be careful). During high water it has an even more pronounced other-worldly look, so it’s worth researching when to go.

2. Memphis and its Necropolis, Egypt

What about the pyramids? The UNESCO World Heritage Site called Memphis and its Necropolis encompasses all the funerary monuments in the Pyramid Fields at Giza, including the Sphinx. Possibly the most iconic of all UNESCO's listed buildings, the main one is the Great Pyramid of Giza, also known as Khufu, the oldest of the Seven Wonders of the Ancient World. Close by are the two other pyramids, Khafre and Menkaure. They're right on the edge of Cairo, so one option is to capture their urban setting, which most tourists try to ignore. Another is to get them in silhouette against s sunset, though photography is not permitted inside the pyramids. If you want to image the Orion correlation theory – that the pyramids are aligned with the three stars in Orion’s Belt – go between December and March.

As with many UNESCO sites, there's a classic shot at the Taj Mahal that everyone goes for; the straight-on shot with the Taj reflected in its pond. So why not go for that? It’s boring, that’s why, and with just a little effort you can take something a lot more creative. Run to the main temple as soon as the site opens (about 30 minutes before sunrise) and you'll have the tombs to yourself, as well as all kinds of angles on the two temples that flank the Taj. You'll also find packs of stray dogs, as well as packs of brightly dressed tourists from all over India and the world. Go to the black marble ‘Black Taj’ on the opposite side of the river bank to get another unusual angle on the Taj.

4. The Ancient City of Qalhat, Oman

This imposing ancient tomb in a crumbled medieval harbour city on the Indian Ocean is one of the newest UNESCO World Heritage Sites, designated only this summer. The main site is the remarkably intact 11th-century Tomb of Bibi Maryam, a mausoleum that stands mostly alone on a hilltop overlooking the Indian Ocean. It was visited by Marco Polo in his way back from China in the 13th century. It's close to the equally remarkable Wadi Shab and the bizarre Bimmah Sinkhole.

The lost city of the Incas is now one of the world's busiest tourist honeypot sites. From 100,000 visitors per year in the 1980s to over 1.2 million now, it's so, so hard to escape the crowds. However, the prize is big; there are few more beautiful sights than the crumbling citadel draped over the mountain ridge with the Huayna/Wayna Picchu peak in the background. It requires some serious effort, but the best way of getting in before the tourists hordes is to hike the Inca Trail, which will ensure you enter at the Sun Gate before sunrise. Tourists get let in at dawn, and it really is worth being there early. Want an unusual shot? Get one of 200 tickets per day to climb Huayna Picchu to get an alternative viewpoint … but only if you have a head for heights.

Those wishing to delve a little deeper into South America that Machu Picchu will discover some real gems, one of which is Los Glaciares National Park in Argentinian Patagonia. Home to some truly massive glaciers, perhaps the best known is Perito Moreno, whose dramatic icefalls into the waiting Lake Argentino are an iconic sight. The 37-mile-long Upsala Glacier might require a wide-angle lens, while the sight of Mount Fitz Roy’s jagged peak above the mountain town of El Chaltén is another dramatic sight.

Ancient historical sights don’t easily come to mind when thinking of the U.S. – especially since the U.S. pulled out of UNESCO in 2017 – and yet it does have some iconic sights on the register. Its 23 include several national parks, including the fabulous Chaco Culture National Historical Park in New Mexico. As well as being a dark sky park – it’s one of the darkest locations in the U.S. – it’s home to some ancient urban ceremonial ruins from the ninth century, and offers some incredible trails ideal for photographers.

This remote island in the South Pacific has an allure all its own. The island’s huge stone monoliths, known as Moai, face inland from every beach and are said to stare at the stars. Over 2,000 miles from mainland South America, the island’s mostly rocky beaches and brilliant blue, calm waters are fringed by lava formations. As well as 887 Moai, which are clustered in small groups on ceremonial platforms known as ahu. They're the last surviving evidence of the indigenous Rapa Nui culture, which succumbed to deforestation, civil war, raids by slave ships and disease. By the mid-nineteenth century Easter Island lay virtually deserted – hence the mystery surrounding the Moai, which by then had all been toppled. Their significance is unknown … but they look great in close-up, in silhouette, grouped together, topled on the ground … the opportunities are endless.

These 18 awesome peaks in the the northeast of Italy have really made a name for themselves with landscape photographers in the last few years. This Alpine area's tallest peak is the 3,343m high Marmolada, from which there are incredible views, while a circular trail around the three jagged peaks of Tre Crime is another must-do. Although they're grouped as one UNESCO designation, the Dolomites actually comprise several distinct national parks. There are so many stunning places to visit with a camera that it’s worth doing some serious research into shooting locations in the Dolomites.

The red rock of Uluru – once known as Ayer's Rock – gets all the attention of tourists, but the entire red centre of Australia's Northern Territory is a photographer's dream. Getting anything other than cliche shot of Uluru is difficult, but getting into position at sunrise and sunset will get you a fighting chance. Ditto for the region's other attraction nearby, Kata Tjuta – also known as the Olgas – which host 36 giant stone domes that are estimated to be around 500 million years old. If you find yourself in this region, try to camp; the night sky is nothing short of the world's best. Take a wide-angle lens, a tripod and lots of SD cards.