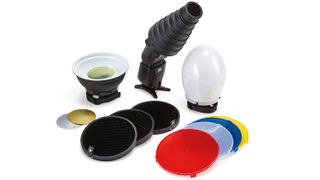 There’s nothing quite like the humble hotshoe flashgun for providing instant illumination in a portable package. They’re not short on versatility either, but add a flash diffuser or modifier and even more lighting effects can be had. These fix to the head of your flashgun, often by a simple Velcro strap, with the aim of modifying the flash burst to create a different visual effect.

The most popular type of flash diffuser is the softbox to soften light. Whether it be a rigid diffusion dome, or a flat-pack, pop-up fabric softbox, the idea is by diffusing light through a translucent surface, you loose the typical harshness of light emitted by a 'bare' flashgun - good news for making portrait lighting more flattering.

Alternatively, if you’re after a more focused feel, a snoot or honeycomb attachment will concentrate light into a tight beam to isolate a subject or create a defined hair light.

Add a colored gel to the mix and you can generate a cool or warm feel to your photo, or this trick can be used to spice up a boring white backdrop when the filter is placed on an off-camera flashgun.

A simple flat white card can bounce light onto a subject, while a black version will help shield other elements in a composition.

You really are spoilt for choice when it comes to flashgun modifiers, but if you're just starting out, many manufacturers include a selection of modifiers in one, cost-effective kit, so you can easily experiment with different lighting effects for maximum versatility.

A winning combination of versatility, quality, and value

FlashBender modifiers are famed for their bendable construction that lets one fabric panel transform from a flat reflector to a curved bounce card, or even a snoot when rolled into a tube. Add the included diffusion sheet and the panel becomes a tall, shallow softbox, which works reasonably well due to your flashgun being pointed upward in this config, which already softens its burst.

This kit also includes a second mini FlashBender panel and diffuser, which comes in handy as the large panel can sometimes feel a bit unwieldy and make your camera feel somewhat top-heavy. For even more creative effects, fit the 3-in-1 honeycomb grid modifier to get a more focused light beam. You’ll also find twenty colored gel inserts to go with it, plus an additional gel set that’ll fit neatly over a bare flash.

All the modifiers attached quickly and securely, while these revised FlashBender 2 reflector panels are 20-30% lighter than the original design. Build quality isn’t quite up there with the polished MagMod system, but it’s not far off, while the clever, adaptable design makes this kit very enjoyable to use and encourages creativity.

Collapsible modifiers that attach instantly to your flashgun with magnets

See all prices (6 found)
78 Amazon customer reviews
☆☆☆☆☆
High quality modifiers
Instantly interchangeable - easy to use
Versatile kit contents
MagGrip is very secure, but tough to apply
UK pricing is on the high side
Not great for light softening

MagMod modifiers use a modular design based around a MagGrip silicone mount that stretches over the head of most flashguns - no straps required. Within this are two powerful magnets enabling instant mounting of MagMod light modifiers. These can be purchased individually, or there are currently eight bundle options.

This midrange Professional Kit contains a MagBounce bounce modifier that’s large enough to create wide flash coverage, yet packs small thanks to its squashy silicone construction. The idea is you get illumination similar to a bounced flash, but MagBounce works in environments where bouncing isn’t an option. It’s great outdoors, but we found you’ll still get a softer illumination using a conventional bounced flash where possible.

The other elements in the kit are a snap-on grid to focus light more tightly, and a set of eight color gels. These are nice and thick, so they easily slip into the included stretchy holder.

Great for focusing and coloring light, but other options are limited

Lastolite’s Strobo range contains numerous flashgun modifiers that can attach to two universal mounts: a bracket design for use with an off-camera flash, and a mount that clamps directly to your flashgun’s head. This kit includes the latter, and it attaches quickly and securely via a Velcro strap. Inside the mount are magnets which make it a cinch to apply individual modifiers.

The attachment design isn’t quite the neatest on the market, but it's secure and we found it very easy to fit to our Nikon SB-910 test flash. What’s more, since each modifier contains a second set of magnets, multiple modifiers can easily be stacked for custom effects.

9mm and 6mm grid modifiers are included, as are a pair of gel mounts, plus a dozen gels including warming, cooling and color effect filters, along with a 2-stop ND filter and a frosting filter. The combination is great for focusing and tinting accent lights, but you’ll need to splash out on extra Strobo modifiers to really maximise the versatility of this kit, and it’s a pity there are no available attachments to soften light.

A kit with good range of modifiers, but you'll need a big kit bag

Calumet’s kit consists of a diffuser for softening light, a snoot for focusing it, and a compact beauty dish for flattering portraiture.

The elliptical diffusion dome is a rigid plastic design that’s bulky compared to flat-pack alternatives and blocks around 3 stops of light, which is a lot, but the Calumet’s dome does produce excellent light softness.

The corrugated snoot is also bulky, and while its metal construction enhances durability and heat-resistance, this is one modifier that could really benefit from having a collapsible design without compromising functionality. At least two honeycomb end caps are included to create an even tighter beam.

For optimal portrait lighting, the 150mm metal beauty dish does a decent job of softening light while still preserving some catchlight sparkle. Gold and silver reflector discs add a subtle warm or cool tone, and further effects can be had from the red, yellow, blue, and diffusion covers. There’s also a trio of plug-in honeycomb grids that’ll control the dish’s light spread. But, like everything in this kit, it’s a bulky design best suited to a home studio rather than location shooting.

A decent and comprehensive kit

This extensive kit contains a 23cm conical-shaped collapsible softbox, large and small roll-up snoots to focus light, a bounce card, a flag for keeping light out of part of your composition, 6mm and 3mm grid attachments, plus three packs of gels for color correction, creative effects, and autumn tints. A filter storage pouch, four flashgun attachment straps, and a carry bag make up the remaining included items.

The relatively large softbox is very good at diffusing light and works well outdoors where bouncing your flash isn’t an option. The other modifiers also work well and attach easily to your flashgun, though the grids don’t hold particularly securely. Most items are lightweight and pack flat for on-the-go versatility.

However, this is still mostly just a fabric and Velcro affair, and though you get plenty of kit, there are only actually seven individual modifiers, plus gels, with the rest being extras of dubious value. This, combined with the fairly simple design and construction makes the pricing seem high and tough to justify.

Also consider the Honl Creative Lighting Kit also available which includes the Speed Strap, a 10 piece filter Kit, a 5 inch gold/silver Snoot and a 1/4 inch grid, a gobo to bounce the light, and a tutorial DVD.

Prime
$64.70
View at Amazon
See all prices (2 found)
Low price
Still includes several modifiers
Compact when not in use
Softbox and honeycomb not that useful
Feels cheap

Despite being one of the cheapest flashgun modifier kits you can buy, Hähnel’s offering does give you plenty to play with. There’s a compact softbox to take the edge off shadows, plus a honeycomb grid and a roll-up snoot to concentrate light into a tighter beam for more dramatic lighting effects. Several gels are included to add a splash of color, and you get a small panel that can double as a reflector or a bounce card.

Each accessory fixes to your flashgun using a simple but fairly effective Velcro strap system, and Hähnel rounds the kit off with a useful adjustable bracket to attach your flashgun to a tripod or light stand.

Though the modifiers can be useful, lasting appeal is limited. The softbox is too small and barely softens a flash burst, you only get seven gel colors, and the honeycomb attachment is very basic. Though the kit’s pricing is low enough to reflect the mediocre build quality, we still don’t reckon this kit is good value as the modifier selection and design rarely enhances your photos. At least the light stand bracket is worth having.

Is it a drum? Is it a spare wheel? It's big enough to be either, but it's best fitted to your camera. When it comes to light softening, bigger tends to be better. At a massive 45cm wide, the RoundFlash will dwarf even the largest DSLR, but thanks to fabric construction, it’s only about 220 grams and it folds into an easily portable pouch.

Set-up is a breeze with a pop-up design that just requires you to quickly snap five magnetic rods into place and strap your flashgun into the back. A simple web of elastic cords secures the RoundFlash to your lens, but avoid wide-angle or short prime optics as vignetting can be noticeable. No biggie though, as ring flashes are best suited to portrait prime lenses with a focal length between 70mm and 105mm.

There isn’t much room to access zoom or focus rings either, but the payoff is light so soft and shadowless that it can give a dedicated ring flash a run for its money. Just remember to crank up your flashgun's power to compensate for the hefty three-stop light reduction.

Want to liven up your portraiture with beautiful backdrops? There's no need to splash out on multiple backdrop rolls or pop-up panels - Just slot the Light Blaster onto your flashgun and it’ll project any pattern, image or scene from a 35mm slide onto a plain surface. Alternatively, you can also purchase packs of transparencies with different themes like wings or landscapes.

But the beauty of this system over similar gobo projectors is you can mount a lens on the front of the Light Blaster to control the focus and spread of the projected image. Unfortunately the Light Blaster’s built-in mount is for Canon EF-mount lenses only, but an optional Nikon F-mount adaptor is available for a small added cost.

It’s also worth remembering that no transparencies are included with the projector, which given this is just a simple plastic shell of the blaster itself does make the price seem a little high. Even so, this is still a great way to bring portrait shots to life.

How to use a snoot with flash photography