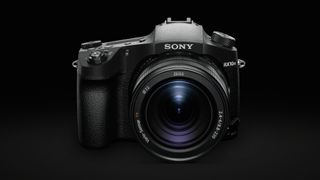 Aimed at high-end amateur photographers, but suitable for a wide variety of photographic users, Sony's premium bridge camera line has received a speed-enhanced upgrade in the RX10 IV.

The model claims the world’s fastest autofocusing speed of just 0.03 seconds, thanks in part to an enhanced hybrid AF system that joins 315 phase-detect AF points with a contrast-detect AF system. It also boasts a staggering 24fps burst-shooting option, with full AF/AE tracking throughout, with its buffer allowing a very generous 249 images to be captured without slowdown.

Similarly attempting to justify the large outlay being asked, the camera's ZEISS-branded lens offers a 24-600mm focal range and f/2.4 to f/4 aperture, which is identical to its Mark III predecessor. Naturally 4K video capture is now included, and offered in 24fps or 30fps options, while the model follows its forebears in having a 20.1MP, 1in CMOS sensor at its heart.

Supporting the zoom lens is optical image stabilisation, which Sony claims offers the equivalent of 4.5 stops when activated. Furthermore we get a 3in screen that not only tilts but also sees a slight resolution boost to 1.44million dots over the Mark III version, and this is also now sensitive to touch. On top of all that, a 2.36million-dot EVF delivers life-like clarity.

A dust and moisture resistant build, comfortable handgrip and reassuringly weighty 1095g further indicate that this is a high-end bit of kit, as do the three lens rings on the lengthy lens barrel, which provide immediate control over aperture, zoom and manual focus.

If you're looking for a powerful jack-of-all-trades solution, the Sony RX10 IV is a very capable contender. The only sticking point here then is price; while the cost is fair when compared with a similar lens and body set up for an interchangeable-lens camera, the RX10 IV is almost twice the price of its closest direct competition, while there are also several tempting DSLR and mirrorless rivals to consider.