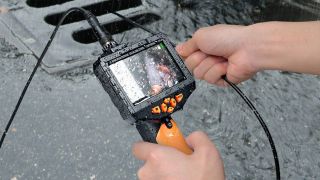 The applications for a tiny camera you can carefully negotiate into places you can’t easily get your eyes are nearly limitless. Indeed the medical endoscopes are very well known, but you can unclench – we will not be giving medical devices any further discussion here! Even leaving aside the doctor’s kit bag, there are a number of different design approaches inspection cameras and borescopes, each with different merits.

Borescopes and inspection cameras have become must-have accessories for tradesmen and DIYers who need to see the pipework under a floor board or to inspect drains. They are now essential tools for mechanics and car enthusiasts – allowing you to see parts of an engine without having to take it apart

Borescopes can have a rigid arm with a fixed camera, a flexible arm, a fully soft wire-like extension or a mixture. And then you have to decide how you would like to view the image. Simple optical principles (like periscopes) have made way for tiny cameras at the business end and the battery and any lighting controls at the other.

There you might find a Wi-Fi, Bluetooth or USB connector to pass the image on digitally, or a built-in display. The point is that there is a lot of flexibility, and the choices have become increasingly bewildering as more players have entered this fast-growing market.

That's why we've created this guide to help you to decide which one to opt for. And remember, to keep checking back as we'll be adding to this list regularly.

A balance of value and quality suitable for most jobs

A camera you can sneak in behind tricky blocks and baffles, yet is still able to capture sharp full-color images? For many that’s still amazing enough, but the Depstech also does so via Wi-Fi to an Android/iOS app, neatly removing one frustration from cabled devices – putting your phone in the line of fire.

With the camera on the end of a semi-rigid flex, and a 2,600mAh battery and dual-antenna housing at the other, you can hold your phone (the viewer) somewhere away from the muck.

Attachments include a magnet, a hook, and a 45-degree mirror, and the system lights its way using six LEDs, which, in practice, affords a focal range from about 5cm (a bit over 2-inches) to eight times that distance.

Cheap solution for Android, PC and Mac – but not iPhone or iPad

This is a ‘does what it says on the tin’ device, no more, no less. Sure VGA resolution is somewhat disappointing (especially given it is advertised as 2 megapixels on Amazon), but it can also be had for the price of two or three cups of coffee (London or New York prices, anyway).

That doesn’t stop it coming with adaptors for traditional, micro and Type-C varieties of USB, and Mac OS and Windows 10 are both capable of recognizing the camera too.

The big positive is that it broadly ‘just works,’ though you might need to download an app as explained in the manual. Crucially, though, you don’t need to service an additional battery-powered device or connect anything to Wi-Fi – it draws its power from the host device and sends the picture down the semi-rigid flex straight to your device. The small box at the user end of the cable includes a dimmer wheel for the LED, and the key hook and mirror accessories are included, although they are a little wiry.

This more rugged-looking device is one which might stand up to a little more punishment than others on this list. It includes a slightly bigger, higher-resolution monitor than most (854 x 480 actual pixels), and a torch for quick external inspections.

There are six brightness-adjustable LEDs surrounding the 70-degree angle main camera too, as well as a second lens, so rather than fit a mirror attachment you simply flip the camera head to its side-camera mode via the switch not on the display device, but the user-end of the borescope where it attaches to the viewer.

There is also 32Gb of storage to record onto included, and the display is charged by familiar USB. The benefits of recording 1080p video (effectively 2 megapixels) from a 1 megapixel sensor are slightly lost on your humble reviewer, but this is far from the only device to make this faux-pas for, presumably, marketing reasons.

A tiny 3.9mm sensor head fits narrower gaps than most

Available in both 1.5m (5ft) and 3.5m (11.5ft) formats, this ultra-slim probe option with 3-10cm focal sweet spot is great for engineers dealing with especially fiddly equipment, and mechanics will like the fact it’s robust construction and built-in monitor prevent the need from getting their phones dirty.

Image quality is much as you’d expect from a cheap LCD 4.3-inch display – this is not an iPhone OLED – but the IPS affords adequate viewing from an off-angle, and you can rotate the image 360 degrees to view it the way that works for you.

In lower light, the frame rate on the display suffers, but you can turn up the six LEDs to help. You can also save the images to the supplied 8GB ‘TF Card’ (basically a Micro SD card). The downside of the smaller-than-usual end-piece is that mirror attachments don’t seem to be available, and it’s also fair to say that the quoted resolution is what the saved file is, rather than the display or sensor.

Control where you look with a rigid arm but adjustable head

Sometimes it isn’t enough to push a long flexible wire into the object of your inspection; long cable probes are great for inspecting HVAC systems, poking around under the decking or looking in the U-bend, but if you want more accurate inspection of complex mechanicals, it can sometimes help to hold the camera nearer, on a rigid arm.

The Ablescope enables this while still affording the best possible view by physically articulating the lens itself via a simple piece of press-button mechanics; push the button and the camera bends at the tip in a tight 30mm arc. Push it all the way and it’ll form a 180-degree U shape. You can also lock the position using a pleasingly traditional rotary wheel at the bottom of the sprung button – all reassuringly practical.

Of course, the flexible probe needs to be treated with respect, and sadly by default this is effectively a USB-only camera, meaning you need an adapter for iPhone/iPad use.

Want an articulated probe head and a flexible cable? No problem...

Vividia has somewhat cornered the market in turning the corner (sorry), in that – in this price-bracket at least – articulating heads are few and far between. Thankfully it has chosen to offer the probe on a semi-flexible arm, as well as the rigid arm of the VA-400 above so you can get the flexible head just about anywhere within reasonable reach.

The semi-flex can be bent and then retains its shape – a little like some desk lamps – which is handy for certain tasks, but since it’s a mechanical approach, rather than simply a stiff wire, the practical length is limited.

Vividia has kept on the safe side of that, so the scope should have a good long life, but the reach is much lower than some of the cheaper non-articulated alternatives.

A much greater range of sharp focusing distance than most

While most of these cameras make do with fixed-focus, this auto-focus alternative can get a sharp view of subjects from a little over 1cm to over 100meters (under an inch to 300ft).

In exchange for what is a different class of camera to most, you need to operate with a little more room – 14mm is a relatively chunky probe head. Since this a non-standard size, it’s a relief to know that the hook, magnet and mirror accessories are supplied.

As this is a USB, you also need to deal with the familiar issue of connectivity – i.e. Android 4.5 and above, Mac, Windows, but not iPhone! The other area of concern is the build quality – the USB connector is fragile, the big probe is somewhat exposed (and has more moving parts), and the LEDs seem prone to being knocked. Despite the concerns, there are a lot of interesting possibilities for this camera – perhaps not getting down and dirty in the pipes, but exploring nature?

Boroscopes can provide an alternative to drones...

$799.98
View at Amazon
See all prices (2 found)
Best borescope for roof inspection
Can be used where drones are illegal
Bright lights
More expensive than a Mavic Mini

A kit of parts, with a minimum length of 88cm (3ft), this rod which fully extends to 4.3m, and is capped with the 30cm semi-rigid section, and the glorious stainless steel inspection camera.

The TVS-500 makes it possible to take a look onto roofs or other high-up locations. We say “kit of parts” because the product features the telescopic element, but extra rods can be added in the middle.

Once assembled the scope gives the impression of a high-tech fishing rod, the dimmer control and a good size and bright (but could be brighter) five-inch LCD powered by two chunky Lithium Ion batteries on the handle above the grip.

The LED can be turned up to a brightness enough to illuminate several meters away (with a nice big control knob), and a microphone can be turned on and off (allowing some interesting AV possibilities). The only slight sign of age is the restriction to 32Gb memory cards for what Vividia calls the DVR function. It remains a pro device though, and is supplied in a professional-quality robust case (as the price certainly dictates).

With 12 built-in lights this versatile but pricey videoscope has an exceptionally long, strong fiberglass-core which packs away into a spool.

It might not look like much, a kind of coated wire-frame arrangement, but it’s actually much easier to grip than, say, the plastic spools common on extension leads. That thoughtful quality extends to the highly durable display which is both waterproof and oil/chemical resistant too. Not that you need to worry about touch-screens; the controls are all on robust buttons around it.

Data can be recorded as stills or video to the SD card, or output via the analog connector. Admittedly the design features what feels like a historic connector – the Mini-USB – but this is a professional tool with a professional price and the cost of a USB adapter is hardly relevant.

A Wi-Fi borescope set is ideally suited for examining home and office AC units since its light telescopic pole makes it easy to get the probe to ceiling height, and the side-mounted camera means you can get a good look at the suspect area while standing directly below it (where it’s easier to direct the pole).

At 28cm (11 inches) the snake section is short enough that it can be cajoled into place without sagging too much.

The camera is good, and to some extent benefits from the texture afforded by the single side-light, as opposed to the ring light-like effect most forward probes have.

The only weak point of the design is that the tech (camera button, charging socket and indicator light) is at the tip of the telescopic tube, where the flexible section is attached, not the handle, as would actually be more convenient. Presumably this avoids internal cabling and since the Wi-Fi sends the image to the phone it’s more an irritation than a practical problem.