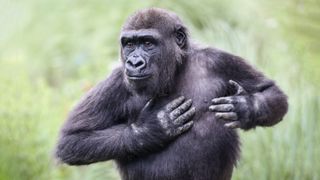 The Canon EOS R5 is about to put professional wildlife photographers out of business. That's our verdict, after extensively testing the Animal AF function on the new camera, which is nothing short of witchcraft.

Much has already been said about the Canon EOS R5, and we'll be saying plenty more in our full review (which we're currently putting the finishing touches on). However, something that simply can't be said enough is just how awesome the new animal autofocus is.

We were expecting to be impressed, but we weren't prepared to be gobsmacked. The Animal AF is so good, and so accurate, that it is actually unfair. Wildlife photographers have spent years wrestling with twitchy autofocus, learning how to perfect their timing, sucking their teeth at all the shots that were focused on the feet or the tail or the wing instead of the eyes.

With the Canon EOS R5, you don't need any of that. It is literally a cheat code for wildlife photography.

We're not exaggerating. Just select 'Subject: Animals' in the AF menu and set  continuous autofocus, then just point your camera at an animal and the R5 will find it. No need to move your focus points or even touch the joystick – just aim in the direction of the creature and the camera does the rest for you.

It automatically finds the face and eyes, and it does so fast. Faster than you could possibly do it yourself. And it reacts quicker, too, when animals make their herky-jerky movements that you didn't anticipate and couldn't put your focus points in the right place for – the R5 does it without hesitation.

Canon only certifies its Animal AF for dogs, cats and birds (including birds in flight – and yes, it does work and yes, it's equally amazing), but we found that it works with just about any species. Gorillas? Check. Gibbons? Check. Lions? Check. Turtles, iguanas, fish, lemurs, seals? Check, check, check, check and check.

The whole 4K and 8K overheating thing is a very public sore point for the Canon EOS R5, and we'll give you our verdict on that in our full review. However, if you were expecting a similar kind of sting in the tail for the Animal AF… there isn't one. It simply works, and it's simply awesome.

And, just like that, Sony is no longer the king of autofocus – Canon now sits proudly on the AF throne, thanks to the R5.