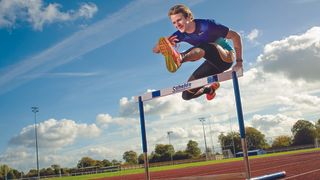 Missed the earlier parts of this feature?

You’ve probably been there yourself: you hit the pop-up flash and your shutter speed gets stuck at 1/200sec, or you attach a flashgun and you get the same thing.

The flash ‘sync’ speed - ie the fastest shutter speed where the camera’s sensor will be fully exposed to light from a flash – is typically 1/200sec or 1/250sec, and you’ll be unable to set a faster shutter speed unless you turn to manual mode. When you do though, half the frame is dark and half is light. This is because the shutter curtains that open and close to expose the sensor to light are moving so fast that only a portion of the sensor is visible when the flash actually fires.

To get around that we use the high-speed-sync flash (HSS) mode. Instead of firing once, it pulses the flash many times in a fraction of a second so that you get a clearly exposed image all the way through the frame. It gives the flash unit less time to recycle and so is inherently dimmer than a fully charged flash, but it's perfect when using flash to light up sports and action portraits.

Step by step: Light up the action

1. Turn on the light

Attach the TTL-compatible wireless trigger to your flashgun and the transmitter to the camera. Put the flashgun and its trigger on a light stand and then power on in this order: flashgun, flashgun’s trigger, camera’s trigger and finally the camera itself.

To set up your camera for high-speed sync, dip into the menu system of your camera and choose a flash-sync speed. Select 1/250ses HSS and click OK to get your camera ready to fire your flash using HSS.

Have your sports model place themselves in position, ready to leap and bound into action. Our athlete ran over two hurdles, and we wanted to photograph the second hurdle, so we positioned ourselves on the floor and the light to the left of the camera to light up his right-hand side.

If your flash exposure is still too dark, try linking up two or three flashguns in HSS mode. Alternatively, switch the flash from TTL to manual to adjust the power output yourself.

To avoid motion blur you’ll need a fast shutter speed. To achieve this, switch to Manual exposure mode on the camera and choose a large aperture, such as f/2.8 or f/4. The resulting shallow depth of field will also help your athlete stand out against the background.

Reducing the shutter speed will make the background darker, but the brightness of the flash-lit subject will be unaffected (up to a point). So, if the background looks too bright in your shots, keep dialling in a faster shutter speed until it appears darker without losing detail.

Keep your sensitivity at ISO 100 unless your shot is underexposed, in which case raise it to ISO 200 or 400.

Now dial in a fast shutter speed. We started at 1/320sec and looked at our image. The background was still too bright, so we set it to 1/640sec to further darken it.

Once you have the settings nailed and your flash firing, get creative with composition. Think about the rule of thirds and tilt the angle of the camera for sporty finesse. If you’re photographing a runner, leave negative space on the side of the frame that they’re running into.

With thanks to 400m hurdler Jack Houghton, and Neil Rose at the University of Bath for the location.