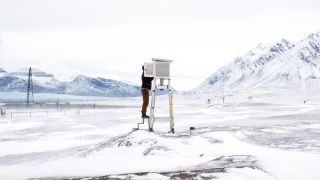 The winner of the 2019 Marilyn Stafford FotoReportage Award has recently been announced as Anna Filipova, for her photo essay 'Research at the End of the World' based at the Arctic Research Station in Svalbard.

Supported by Nikon for the first time this year, the Marilyn Stafford FotoReportage Award is granted to a professional woman photographer "towards the completion of a compelling and cohesive documentary photo essay which addresses an important social, environmental, economic or cultural issue, whether local or global."

Marilyn Stafford began her photographic career in New York in 1948, when she was asked to photograph Albert Einstein by friends making a film about him. From there, she travelled across the world, starting in Paris in the 1950s. Her friends and Magnum founders Robert Capa and Henri Cartier-Bresson helped to shape her work, which included commissions from Paris fashion houses and photos of street children living in one of the city's slums.

The winner of 2019's Award is Anna Filipova, a photojournalist who has worked for the International New York Times and Reuters. She's been published in CNN, BBC, Washington Post, The Guardian and others.

For her winning project, Anna travelled to Ny-Ålesund, which is located on the 79th parallel north on Svalbard archipelago. This makes it the most northerly permanent civilian settlement in the world.

Ny-Ålesund also houses the largest laboratory for modern Arctic research in existence, with its population being predominately made up of research scientists. It has very restricted access, but over the years it's been visited by a number of significant figures, including John McCain, Hilary Clinton and Ban Ki-moon.

Anna Filipova's images show the stark conditions the research scientists live and work in. It's certainly fascinating to see what everyday life is like at these remote research stations – and we can only imagine how Anna will expand her project with the £2,000 prize money.

If you're interested in entering the 2020 competition then you can find out more information on Marilyn Stafford's website. In 2017, Marilyn set up the Marilyn Stafford FotoReportage Award for women photographers in association with FotoDocument. The Award is reserved solely for documentary photographers working on projects that are intended to make the world a better place.

Women from any stage of their careers are welcome to apply, but they must have already started the photo essay for which they're seeking funding and must be able to show work in progress. The 2020 awards are open for submissions now.

Best Nikon lenses in 2020: expand your Nikon DSLR with these lenses
Best DSLR in 2020: DSLR cameras for beginners, enthusiasts and pros
Nikon D780 vs Nikon D750: How do they compare?