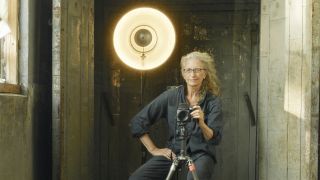 For nearly fifty years, Annie Leibovitz has been documenting the contemporary world. Able to personalise even the most widely known subjects, she is recognised as one of the most influential photographers of our time.

At Work addresses young photographers and readers interested in what photographers do to make an image. Subjects include photojournalism, studio work, working with writers, and making the transition from film to digital cameras.

Go behind the scenes of Annie Leibovitz's images

At Work (first released in 2008 and recently out of print) reveals the inner workings of Annie Leibovitz’s practice. Inside, she shares details of her creative process and legendary career, from her early years as a young photographer for Rolling Stone to her recent work at Vanity Fair and Vogue.

Leibovitz takes the reader on a journey – from analog to digital – through some of her most unforgettable photographs and how they came to be.

Memorable subjects include the Rolling Stones tour in 1975, the famous session with John Lennon and Yoko Ono just hours before he was assassinated, Whoopi Goldberg in a bathtub of milk, and portraits of Queen Elizabeth II, among many others.

What's new in the updated book?

This revised edition brings Leibovitz's bestselling book back into print.

There are three new chapters featuring photographs taken since the original publication.

The end of the book features a section dedicated to answering Annie's top ten most-asked questions, like ‘What advice do you have for a young photographer who is just starting out?’ and ‘How is photographing a celebrity different from photographing a regular person?’

Along with tips, technical preferences, and advice for photographers, Annie shares details on the camera equipment she uses, the effects of lighting, and even the importance of selecting the right music for a shoot.

Annie Leibovitz recently put her name behind the camera quality of the Google Pixel 3.

Where can I get the book?

Annie Leibovitz At Work is out now at www.phaidon.com