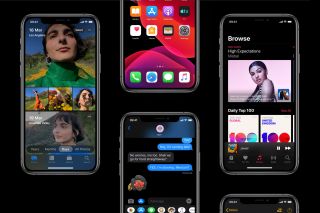 If you want to take your iPhone photography to the next level, make sure you download iOS 13 to take advantage of some interesting new photo features and upgrades. However, it's not only the Camera and Photos app that have been tinkered with - iOS 13 also includes upgrades to Maps, Siri, Memoji and more.

Some of the biggest photography-based upgrades seem to be based around editing. With upgraded features such as Vibrance, White Balance, Sharpen, Definition, Noise reduction and Vignette, your iPhone photo editing process will have never been so refined.

Video editing has also been given some more juice, as you can now adjust exposure, apply filters and, most importantly, rotate(!) your video. As anyone who's ever accidentally started filming in the wrong orientation, it can be a complete pain trying to fix it in post, so this will definitely be a welcome feature. Plus, these video edits are non-destructive, so you can remove an effect to return to your original video.

There have also been changes made to the Camera app. Apple have developed a brand new Portrait Lighting effect, High-Key Mono. This will create a black & white portrait with the subject against a clean, white background.

In addition, you can now adjust the position and intensity of the studio lighting mode. Move the light closer to your subject to smooth skin, sharpen eyes and brighten facial features. Alternatively, move it further away for a subtler effect.

Outside of the photography upgrades, there are plenty of other features to keep us entertained. Apple have introduced a new Dark Mode designed for low-light environments. This gives iOS and apps a dark color scheme and can be switched on manually, or scheduled to turn on and off automatically.

The Maps app has also received a significant update, featuring improved and more realistic details for roads, beaches, parks, buildings and more. There's also a new Google Street View-style feature that allows you to look around a location before you get there. In addition, you can also access real-time public transport information that even includes updates about suspensions and cancellations.

The new iOS 13 is out today. While there isn't an official release time, it's likely that it'll be available from around 6PM BST.