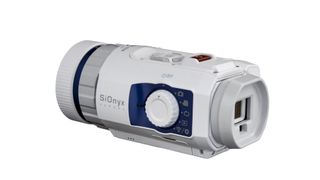 Though the action camera market seems to be getting more crowded by the hour, here’s an interesting prospect we haven’t seen yet – an action camera that can turn night into day.

The Aurora Sport is a new action camera from SiOnyx, who specialize in infrared technology, and it uses the company’s proprietary Ultra Low Light imaging technology to turn night into full-color daylight. This is the same technology that recently won the company a $20 million contract with the US Army.

The camera itself can shoot HD video and 10MP stills, and is water-resistant with an IP67 rating (which means it can last in depths of up to 1m for about an hour).

It has a Micro OLED Display and built-in Wi-Fi with complementary iOS and Android apps, and it has a built-in 32GB microSD card – which translates to space for about four hours of video.

Advanced shooting modes on the Aurora Sport also include HDR, panorama and time-lapse. When night falls, you simply switch the scene mode and the camera activates its ultra-low-light mode.

So how well does this work? We’ve only seen a brief sample of video from the camera, but it looks pretty good. The 1-inch sensor – considerably larger than you’d expect in an action camera – allows it to produce a lot more colour and detail at night-time than you’d expect. You can see a screengrab below from the Aurora sport in action, showing some of its night-time footage with the night scene mode turned on.

The Aurora Sport is nice and light as well, weighing just 288g. Its battery is a rechargeable Li-Ion version.

The SiOnyx Aurora Sport will be available for an introductory price of $399 - and is half the price of the original black-and-green colored Aurora night scope which was launched last year.