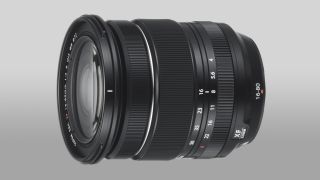 While the lens had been prematurely revealed to the public thanks to an earlier leak by the usual online sources, there are a number of tasty features and that still provided some nice surprises.

Chief among them is the awesome amount of optical image stabilization built into the lens. The Fujinon XF 16-80mm f/4 R OIS WR features a whopping six stops of stabilization, which makes the optic a great performer in low light or at the long end where camera shake would otherwise be problematic.

It's also a useful comeback to the criticism that cameras like the Fujifilm X-T3 and Fujifilm X-T30 don't possess in-body image stabilization.

With the crop factor of Fujifilm's X-series cameras, the XF 16-80mm f/4 has an effective 24-120mm focal range in full-frame terms, with an effective depth of field of f/6 (though in terms of light transmission, it still performs to its f/4 specification).

It's a constant aperture, too, meaning that you don't lose any performance as you go from wide-angle to telephoto shooting. In addition the lens also has a minimum shooting distance of 35 cm over the entire zoom range, which gives a maximum magnification of 0.25x.