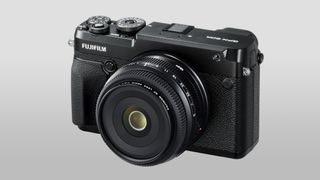 Weighing a slight 335g and measuring a svelte 84mm x 48mm, it makes a great optic for both street and travel photography.

With the crop factor of Fujfilm's medium format cameras, the lens has an effective focal length of 40mm – again, this standard field of view  speaks to the lens' suitability for street photography and all-purpose shooting.

The GF 50mm f/3.5 is the tenth entry in Fujifilm's GF line – the manufacturer's highest quality lenses, produced with the same expertise as the Fujinon optics intended for broadcast use.

The lens is dust and weather resistant, capable of operating in challenging conditions down to -10°C / 14°F, and boasts 9 elements (including 1 aspherical) in 6 groups.

It also features 9 aperture blades for pleasing bokeh and, with the GFX' crop factor giving it an effective depth of field of f/2.8, the lens has the ability to render soft out-of-focus backgrounds for portraiture.

In addition, the lens possesses very low breathing that makes it suitable for filming video footage – something that should make it an appealing option for owners of the Fujifilm GFX 100, which offers impressive and uncropped 4K video.