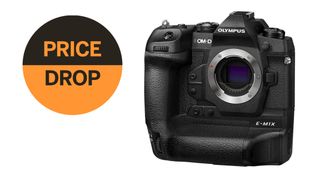 This year has seen some great professional camera systems, but one of the most impressive is the Olympus OM-D E-M1X – and in an amazing Black Friday camera deal, it's been discounted by a massive $400!

Olympus' flagship pro camera – with 60fps burst shooting, 80MP High Res imaging, up to 7.5 stops of image stabilization, and everything from C4K 24fps to 1080p 120fps video – is just $2,599 in this Adorama Black Friday deal. An incredible price for this incredible Micro Four Thirds marvel!

Olympus' most advanced camera ever, the E-M1X (review here) features all the tools that a professional could need. Blistering stills bursts of 60fps with locked AF or 18fps with AF tracking give you continuous shooting firepower, and the amazing Pro Capture feature records the 14 frames before you even press the shutter button!

It also comes with all manner of cutting-edge features, such as built-in Live ND filters to shoot silky smooth waterfall shots without physical Neutral Density filters, and a fully customizable AF area, which enables you to create Tetris-like AF shapes that perfectly match the shape of your subject!