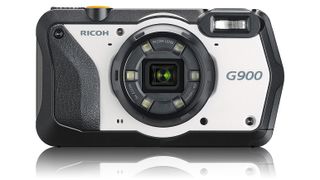 Alongside the exciting new GR III, Ricoh has launched a replacement for its G800 industrial-strength compact camera, launched way back in 2014. The new G900 is designed for industrial sites, disaster-relief situations and other challenging workplaces. It’s for a market where photography is information-gathering rather than an artistic pursuit.

The G900 is also crushproof against weights of up to 100kgf (kilogram force) and incorporates a protective reinforced glass element to the front surface of its lens and protectors at crucial parts of the body. Ricoh says it’s highly resistant to chemicals such as ethanol, sodium hypochlorite, and the liquid chlorine dioxide solutions used as fungicidal food additives.

It also has GPS and barcode scanning capability, in a downsized body 26% smaller than its predecessor. Inside, there’s a back-illuminated 20-megapixel CMOS sensor, and the G900 can also capture 4K video.

Other industrial credentials include the same wide neck strap as the previous G800, allowing a two-point cross-shoulder suspension for secure carrying at worksites, together with a contoured grip and optimised button positioning for operating in difficult environments.

The Ricoh G900 is certainly not the only tough camera on the market, as there are plenty of others, like the Olympus TG-5. The difference is that the G900 is also designed to protect sensitive information and restrict the level of access and control for different users.

The G900 is designed for use in situations where information gathered may be sensitive, or it’s not desirable to give operators full access to the camera’s controls. There’s a password-protected Camera Lock function and it’s possible to restrict the use of certain operations via two passwords – one for the administrator, one for the user.

It’s also possible to set a password or each SDHC/SDXC memory card, so that even if it’s lost or stolen the images on the card are protected and will not be visible to outsiders.

There’s a ‘transparency guide’ that can display a previously captured image on the LCD as a template for capturing new images with the same composition, and as well as memory card storage the G900 has 6.5GB of built-in memory, allowing the capture of up to 856 full-size images. Ricoh points out that internal storage is added protection against the loss of sensitive images/information on removable memory cards.

The Ricoh G900 is not really a consumer camera in the way we understand them, but a reminder that digital imaging is also an important part of many sensitive industrial, commercial and humanitarian activities. It goes on sale in May 2017 at an RRP of £699.99.