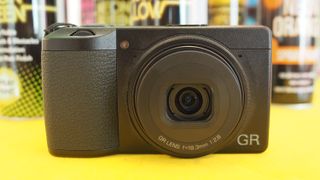 The much anticipated Ricoh GR III was officially unveiled today, offering some significant improvements on the highly regarded Ricoh GRII – which already stood as one of the best compact cameras available.

You can find out how it handles and shoots in our hands-on Ricoh GR III review, but here are the key specs and improvements you can expect in the new model.

The GR III pulls rank on its older sibling with a trio of new components: a new 24.23MP APS-C CMOS sensor (a big step up from the GR II’s 16.2MP), a new image processor, GR Engine 6, that delivers 14-bit RAW files with enhanced image quality (the GR II shot 12-bit RAWs), and a new lens.

The last one might be somewhat misleading, as the lens features the same 18.3mm (28mm equivalent) focal length and f/2.8-16 aperture as the GR II. However, it now has six elements in four groups (rather than seven elements in five groups) which reduces the depth of the lens barrel. It also possesses nine aperture blades, for smoother and more pleasing bokeh.

The Ricoh GR III possesses a hybrid autofocus system that uses phase detect (for speed) and contrast detect (for accuracy) technology, reducing the amount of focus hunting by combining both systems.

It features eight different focusing modes, including a newly added continuous focusing mode, and the AF also reacts to touchscreen input – yes, Ricoh has introduced a touchscreen for the first time in GR history.

The three-inch, million-dot screen supports gestures, which enables direct selection of the focus area by tapping, scrolling through menus by swiping, and magnifying images by pinch-and-zooming.

The screen features what the company calls Air-Gapless construction. In short, this means that a layer of resin has been placed between the glass and the surface of the screen, which makes it a lot easier to see in difficult lighting conditions.

Image stabilization and much more

The camera also packs a 3-axis image stabilization ‘Shake Reduction Mechanism’, which compensates for pitch, roll and yaw movement. This is quite a big deal, and for more reasons than you might expect.

Since the GR III has dropped the pop-up flash of its predecessor, the stabilization – which Ricoh says is good for 4 shutter steps of compensation – bolsters the lens’ maximum aperture of f/2.8 to keep you shooting even when the light starts to disappear.

However, the Shake Reduction Mechanism facilitates more than just improved stability. It’s also at the heart of a new dust removal system, applying ultrasonic vibrations to the sensor upon startup to remove unwanted articles – a technology that has been transplanted from the company’s line of Pentax cameras.

In another clever bit of engineering, the sensor features a filterless design to capture greater image quality. However, in environments where moire and false colour occur, you can activate the the Shake Reduction Mechanism (in two different strengths) to apply micro-vibrations when taking the shot, to provide an anti-aliasing filter simulation.

The Ricoh GR III features ten built-in image filters, for which individual values (such as hue, contrast and sharpness) can be altered, as well as an HDR mode, and those lovely new 14-bit RAW images can be edited and developed in-camera.

You can also capture light trails, thanks to the new interval shooting feature, and the built-in intervalometer can be set in intervals of 10 minutes to 24 hours. You can also capture multiple exposures, with Ricoh claiming that 2,000 images can be overlaid – although we imagine the effect isn’t really noticeable at that stage.

The GR III also features a new built-in macro mode, something that required a separate macro lens attachment on the GR II. This boasts a minimum focus distance of 6cm and a maximum of 12cm, though unfortunately we found macro shooting a bit hit and miss in our hands-on review.

More successful is the built-in ND filter to enable more control over exposure when shooting in strong light. As opposed to to a software simulation as seen in the Olympus OM-D E-M1X, the ND here is actually a physical filter within the camera.

You can also select a 35mm or 50mm (equivalent) crop mode, to change your composition when shooting, though the megapixel count will be reduced accordingly.

A feature we really appreciate is the 2Gb of built-in memory, always helpful for when your memory card gets full, which is good for 31 RAWs and 140 jpgs that can be transferred to your card when it’s available.

Something we weren’t too impressed by, however, was the battery life; we were only able to shoot for about an hour and twenty minutes, capturing 180 images before the battery gave up the ghost. It’s a good thing, then, that the camera has a USB-C connector to enable easy charging on the go.

The Ricoh GR III will be shipping in mid-March at a price of £799.99 / $899. A range of accessories, including a 21mm wide-angle conversion lens and an external viewfinder, will also be available.