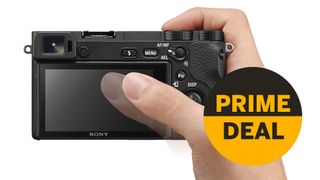 We thought this deal on Sony's Alpha A6500 mirrorless camera was pretty special when it was revealed in the Prime Day sale when it started yesterday morning. But now with less than five hours to go until the 48-hour summer dealathon ends, Amazon has slashed a further £50 off the price - on top of the £300 it took off yesterday. And the discounts don't end there, as Sony will also give you £300 of cashback if you buy this camera. So, in all, that now adds up to £650 worth of discounts on this full-feature APS-C mirrorless model with its vlogger-friendly fold out screen.

And the price you end up paying after all this? Just £599... That's what you call less than half price!

Sony a6500 mirrorless camera (body only) £599 after cashback
This is Sony's flagship crop-sensor mirrorless camera, which uses a 24 megapixel APS-C-sized sensor. The miniature body comes with built-in image stabilization, to keep your shots steady whatever the lens you choose to use with it, and whether shooting stills or 4K video. You pay £899, but get £300 back from Sony via its summer cashback promotion – making this one amazing Prime deal.
UK deal – ends midnight 16 JulyView Deal

Sony RX100 III large-sensor luxury compact camera £379
This is the best-ever price on this premium point and shoot camera. The key attraction is its large one-inch 20 megapixel sensor, that guarantees much better image quality than your average point and shoot camera, or your smartphone. The Sony Cyber-shot RX100 II has  a 24-70mm f/1.8-2.8 Zeiss zoom built in.
UK deal – ends midnight 16 JulyView Deal

Sony A7 Mk II full-frame camera + 28-70mm lens:
£739 after cashback
Sony is knocking £290 off the price of this second-generation full-frame mirrorless camera from the Sony A7 stable. This model adds in-body image stabilization to the mix for steadier shooting. You pay £1079 today, but get £300 back direct from Sony in the Summer Cashback scheme. This all adds up to a spectacular full-frame mirrorless deal (and yes, this price does include the lens).
UK deal ends: midnight 16 JulyView Deal

Sony A7 full-frame camera + 28-70mm lens:
£509 after cashback
This was the first ever full-frame mirrorless camera, but even though it is old it is still a great way little camera – and at this price it is a real bargain. The camera comes with Sony's own 28-70mm f/3.5-5.6 standard zoom from Amazon UK. You pay £659, but get £150 back from Sony via its summer cashback promotion.
UK deal ends: midnight 16 JulyView Deal

Canon EOS Rebel SL2 with 18-55mm lens: save $165 now $384
The Rebel SL2 is one of our favorite DSLRs for beginners. Canon has just added a newer SL3 model, but is keeping the SL2 going as a cheaper alternative – and this amazing $165 discount makes it almost too good to miss. You can buy the SL2 body only, but we recommend it with this EF-S 18-55mm STM lens as a kit.
US spotlight deal – ends midnight on Tuesday 16 JulyView Deal

Insta360 ONE X: was £409.95, now just £349 @ Amazon
The Insta360 ONE X is slim enough to slip in a shirt pocket and makes 360-degree video and stills amazingly easy. It captures 360 video at 5.7K resolution, uses Insta360's Flowstate stabilisation system for rock-steady footage and comes with an app that offers remote operation and powerful video editing tools.
UK deal – ends at midnight on 16 JulyView Deal

Fujifilm instax Mini 9: was £69.99, now just £44.99
One of the most popular instant cameras out there, and for good reason – this cute looking Instax is the perfect thing to take to parties, and produces credit card-sized snaps no matter where you are! Just don't forget to pick up some film…
UK deal – ends 8pm on 16 JulyView Deal

Amazon Kindle Fire HD10 (32GB) - £94.99 (save £55)
A tablet is becoming a must-have accessory for any photographer... for research, to show others your portfolio or for a bit of light image editing when travelling. The Fire HD10 is our favourite budget tablet - but with this huge Prime Day discount it is a steal. Features a 10in Full HD screen and a built-in Alexa smart speaker.
UK deal – ends midnight 16 JulyView Deal

The best Amazon Prime Day camera deals: everything you need to know