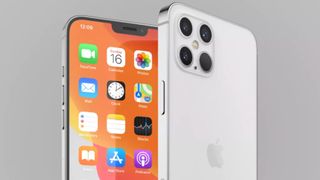 The iPhone 12 was initially expected to arrive on its traditional September release date, but over the past few months we've seen a swarm of speculation that some, or all, of the iPhone 12 family could actually be arriving much later. The iPhone 12 collection is rumored to include two models that run sub-6GHz 5G and two premium handsets that have the superior mmWave 5G.

The difference between these forms of 5G basically comes down to speed. While both are much speedier than the 4G speeds we've been used to, mmWave has the potential to offer speeds of 5.0 Gbps or faster. However, the downside to mmWave is that the frequency is much more easily blocked than sub-6GHz.

• Read more: iPhone 12: Everything you need to know

This has lead to difficulties regarding the mmWave antenna, as there have been previous reports that suggested that Apple had to redesign where the antenna was housed in the iPhone 12, due to issues with the signal being blocked too easily.

While we can't be 100% certain that this is what has caused the delay, it does seem likely that it's had some kind of impact – especially when combined with the coronavirus pandemic that has caused significant manufacturing delays for many companies. According to GSMArena, the mmWave iPhone 12 is about two months behind schedule. However, it also appears that the sub-6GHz is also running late by about one month as well.

There have been reports that the final iPhone 12 assembly could be delayed until early October, which means that we could be seeing the iPhone 12's official launch in November.