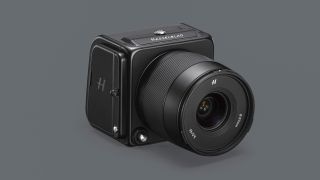 As part of its ongoing celebration of 50 years since the original moon landings, Hasselblad has announced a lunar-themed limited edition that pays tribute the first ever camera on the moon: the Hasselblad 907X Special Edition.

Comprising the 907X camera body and the CFV II 50C digital back, the Hasselblad 907X Special Edition comes in matte black and features a commemorative plate with the text “On the Moon Since 1969”.

Hasselblad was famously chosen by NASA to provide two cameras for the Apollo 11 moon landings – a Hasselblad 500EL Data Camera (HDC) and a Zeiss Biogon 60mm ƒ/5.6 lens, taken down to the moon's surface, and a Hasselblad 500EL Electric Camera (HEC) with a Zeiss Planar 80mm ƒ/2.8 lens as a second camera shooting from inside the Eagle lunar module.

A third HEC – in black, unlike the HDC which was painted silver to stabilize the camera when moving between temperatures ranging from -65°C / -85°F to over 120°C / 248°F – was used by astronaut Michael Collins aboard the command module Columbia in lunar orbit.

The two cameras that made it down to the moon's surface were left there, and have been gathering moon dust ever since, while Collins' black HEC returned to Earth with the astronauts. Hence the significance of the Hasselblad 907X Special Edition being in matte black, to honor that space-faring camera.

The Hasselblad 907X is the company's smallest medium format camera ever, and couples with the Hasselblad CFV II 50C – a 50MP standalone digital back that is also compatible with most V System cameras from 1957 onwards, breathing a new lease of life into 60-year-old analog roll-film cameras.

With the new camera and back combined, the 907X Special Edition boasts up to 14 stops of dynamic range and can capture 16-bit RAW images, with its 3-inch tilting touchscreen designed to be reminiscent of shooting top-down like the medium format cameras of old.