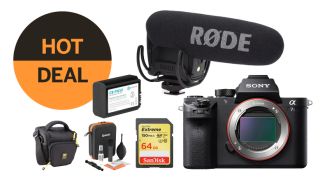 The countdown clock is ticking, but there are still plenty of hot Cyber Monday camera deals – and if you're a videographer, this one is white hot! Right now you can pick up the video-oriented Sony A7S II with over $252 of freebies, including a Rode shotgun microphone!

For $1,998 – already a $440 saving on the list price – you get the Sony A7S II, Rode VideoMic Pro, 64GB SanDick memory card, spare battery, camera bag and cleaning kit. It's just one of the brilliant B&H Cyber Monday deals that are running until midnight tonight!

Sony A7S II + Rode VideoMic + extras: $1,998 ($692.83 value)
The A7S II is Sony's video-centric Alpha model, specifically designed for videography needs. Coupled with the Rode VideoMic Pro it becomes a video and vlogging powerhouse, especially with all the other extras!View Deal

The Sony A7S II's 12.2MP is tailor made for video performance, with larger photosites to facilitate cleaner video and superior low light performance. Capable of shooting 4K video up to 30 frames per second, it's a potent videography body.

The Rode VideoMic Pro is a true shotgun microphone, and a premium offering to deliver reference-quality audio for mobile journalists, vloggers, budget filmmakers, and run-and-gun shooters.