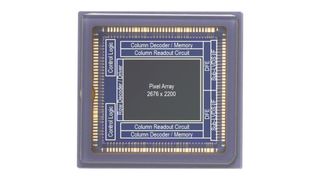 Canon scientists have published a highly technical, but very interesting, paper in the Japanese Journal of Applied Physics detailing its research and development of a new global shutter sensor technology.

'A 3.4 μm pixel pitch global shutter CMOS image sensor with dual in-pixel charge domain memory' breaks down the technology that would, in the first instance, remove the last mechanical parts from a camera body,  by negating the need for a mechanical shutter. In the second instance, it would eliminate factors such as ghosting and rolling shutter.

A traditional shutter records picture information one line of pixels at a time, from the top of the sensor/image to the bottom. If there is any movement, then by the time the data is recorded by the lower half of the sensor it will be in a slightly different position to when it started – hence the rolling shutter phenomenon where subjects appear to warp.

A global shutter, by contrast, records the entire pixel range to the sensor simultaneously, eradicating any movement artifacts. The downside, however, is that global shutters traditionally have reduced dynamic range. This is because every pixel requires a dedicated memory cell, and thus each one is made smaller to make space for it.  Canon's flagship Cinema EOS filmmaking camera the Canon EOS C700 already features a global shutter.

Canon's research addresses this problem in a creative way. "This paper deals with a specific sensor that reads the sensor twice in an HDR mode," explains Canon News.  This allows it to overcome some of the dynamic range inefficiencies with global shutter sensors.

"By incorporating dual memory, Canon quickly reads the sensor twice and stores the values into the memory. Those two values then are used to form the HDR image from the sensor.  They use special lightguides to take a 2.4um pixel pitch down to a 1.1um actual pixel size. Using the dual memory, Canon eliminates ghosting from appearing on fast moving objects when taking the double images required for HDR."

It's certainly a fascinating innovation and, with global shutters and organic sensors set to be the new frontiers in the photographic industry, we'll be watching the development and implementation of this technology with great interest.

The best 4K camera for filmmaking