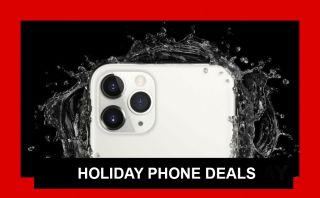 The holidays are officially here, now that Black Friday has been and gone, and the holiday phone deals are really heating up! We've seen some amazing phone deals already, from super affordable SIM only smartphones to mind-bogglingly good phone contract deals.

We've been seeing some incredible deals for the last few weeks, but none of them compare to the discounts we're seeing now that the holiday deals have begun

We've separated the best holiday phone deals into UK deals and US deals, so simply use the menu above to navigate to the appropriate territory for you!

iPhone X 64GB: £639 from £899
Get a huge discount on the iPhone X 64GB and save £150 off its listed price! This fantastic phone is water resistant up to one meter for up to 30 minutes. Plus, it has dual 12MP cameras, Portrait Mode and Portrait Lighting!
UK dealView Deal

iPhone XR 64GB+30GB data+unlimited mins & texts: £33/mo
If you're looking for a great iPhone deal, then look no further! The iPhone XR is available with 30GB of data, unlimited texts and unlimited minutes for just £40 up front and then £33/mo for two years. Where do we sign up?? UK deal View Deal

12GB data + unlimited texts & minutes SIM: £10
This amazing deal comes courtesy of Three - you can grab all you can eat texts and minutes with an impressive 12GB of data all for the great price of £10 per month! This is a truly fantastic deal, so don't delay! UK dealView Deal

Oppo Reno 10x Zoom was £699 now £499
This is one of our favorite, and most groundbreaking, camera phones of 2019. Its triple camera set-up, and inclusion of its zoom, means that it can get in that most closer to things in the distance - which definitely elevates its photographic potential.
UK dealView Deal

Huawei P30 PRO was £900 now £749.95
This has been one of the best, if not the best, camera phones around over the last year - and the price is now slashed in the Amazon UK exclusive offer.
UK deal. View Deal

iPhone 11 Pro 64GB – 100GB data: £55/month (£49 up-front)
UK network Three has some great deals on iPhone for Black Friday. We like the look of this iPhone 11 Pro offering. This gets you 100GB data every month, unlimited texts and unlimited calls - for £55 a month (and a £49 upfront payment). 24-month contract
UK dealView Deal

EE 60GB Sim Only deal for £21/month
This SIM only deal gives you twice as much data as usual over EE's Black Friday sale period... so that is 60GB of data for £20 a month, and you get free texts and calls too. Your allowance can be used anywhere in the EU with no extra charge.
UK deal. Ends 10 December.View Deal

Smarty Unlimited SIM-only deal |
Unlimited 4G data | Unlimited calls | Unlimited texts |
£22.00 a month (save 12%)
This unlimited 4G SIM-only plan gives you unlimited data, unlimited voice calls, and unlimited SMS texts - and all you pay is £22 a month for life (or until you decide to cancel). Simple, honest mobile - as Smarty calls it - and it is hard for us to disagree thanks to its month-at-a-time fixed pricing, and unrestricted usage.
UK dealView Deal

Unlimited Everything Three SIM-only deal
Unlimited 4G mobile data | Unlimited calls | Unlimited texts |
£18 a month This is easily one of the best SIM-only deals around at the moment - and has been reduced by £3 a month for Black Friday. You can chat to your heart's content, text until your fingers go numb, or keep downloading those Netflix boxsets until your phone's memory bursts. 12 month contract.
UK deal
View Deal

EE Mobiwire Nokosi: £9.99 from £29.99
Having a spare back-up phone for nights out or holidays abroad is always a great idea, and this EE Mobiwire Nokosi is the perfect choice. With £20 knocked off the price, this cheap little mobile is only £9.99 - bargain! UK dealView Deal

Otterbox Symmetry iPhone 7/8 Case: £13.99 from £29.99
Save over 50% on the Otterbox Symmetry Fine and Stylish iPhone 7/8 case in this fantastic deal. Available in multiple colors, the dual-material construction helps to absorb shock and withstand any unfortunate drops. UK dealView Deal

iPhone XS Max 512GB: $400 off with Unlimited
Add iPhone XS Max 512GB with monthly device payments or full retail price to your cart and get $450 credited to your account over 24 months. Plus, you can get a $200 Prepaid Mastercard when you switch to Verizon on Unlimited. US dealView Deal

Motorola Moto Z4: $10/mo from $20.83/mo
Save half on your phone bill with this stunning deal on the Motorola Moto Z4! This 5G-upgradable smartphone has a 48MP camera sensor and is available for just $10/mo over 24 months. What a bargain! US dealView Deal

Buy one iPhone 11, get another FREE!
When you buy or lease an iPhone 11, iPhone 11 Pro or iPhone Pro Max you can get an iPhone 11 (64GB) for $0/mo when you activate both phones with a Sprint Flex Lease or 24-month installment plan! US dealView Deal

iPhone 8 256GB Plus Unlocked: $389.99
Pick up the iPhone 8 Plus 256GB Unlocked for just $389.99 in this Cyber Monday deal. Operating iOS 11 and with 256GB of storage, this is the perfect smartphone for those who aren't bothered by the latest tech. US dealView Deal

Straight Talk Prepaid iPhone 6s 32GB: $179 from $399
If you're looking for an affordable one-off payment for an iPhone, why not check out this iPhone 6s 32GB deal for just $179? While the 6s is a few generations old now, it's still a great phone - especially at this amazing price. US dealView Deal