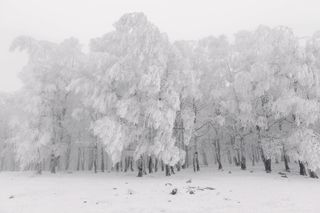 Frederik Buyckx began working as a photographer only six years ago. Since then he has won, among other accolades, the Young Promising Photographer Award (twice), the 2014 ANI PixPalace Award at Perpignan, and a World Press Photo Award. Most recently, he was named Landscape Photographer of the Year at the Sony World Photography Awards for his series ‘Whiteout’ – six striking and emotive images of snow-covered landscapes in the Balkans, Scandinavia and Central Asia. At the age of 32, the Belgian is at the beginning of a remarkable career.

Buyckx (pronounced ‘boeks’), while based in Ghent, is something of a nomad. His photography, and his life, is a collection of travel adventures, as he observes and records the different people and ways of life he encounters along the way (similar to fellow Belgian Kevin Faingnaert, who we met last issue). A messy quiff of ashy brown hair tops a face with an easy smile, and his manner suggests a relaxed equanimity with the world – whatever comes next is fine with him, providing it’s something interesting.

He began travelling at the age of 17, and took an evening class in photography with his cousin around the same time, but ‘real’ photography came a little later. Buyckx’s studies were in advertising design, and after a four year masters degree, he ended up being offered his dream job, interning for a top Belgian ad agency in New York. “It was a great experience – I was sitting, drawing, coming up with concepts and ideas, but I was behind a desk. I didn’t know where I wanted to go exactly, but I knew I wanted to travel.” At the end of the internship, he bought his first DSLR, booked a flight to Central America, and left the world of advertising behind. “I hadn’t wanted to become a photographer, but I found something that allowed me to combine travelling with a lifestyle. I discovered that I really liked it. Photography gave me a reason to travel, and it gave my travels more sense.”

His award-winning ‘Whiteout’ images were taken from two separate ongoing projects – ‘Wolf’, which he begun in 2014, and ‘Horse Head’, which he started only last November. Shot in Kyrgyzstan, the Balkans and Norway, ‘Whiteout’ was born from Buyckx’s fascination with small communities who live in harsh winter conditions. In this snow-bound white world, there is a simplicity and a quiet emptiness. A donkey stumbles in an empty mountain-scape, a thick black road disappears into nothing, a figure with a broom is walking to somewhere – we don’t know where.

Photography gave me a reason to travel, and it gave my travels more sense.

“This work is more personal than my previous projects. I wanted to explore nature, and to work in black and white. It’s more peaceful, it’s darker in a way – the snow landscapes are very bright, but all of the other images in the series are very dark. I wanted to explore something new, but I can’t find a subject via my computer – I need to be somewhere, to experience things, and to see them, to be inspired. So I just started doing small pictures of places I wanted to go, without any ideas. Most of my projects evolve – the idea becomes an idea because I do something.”

Mostly, leaving Belgium seems to be at the core of ‘doing something’ for Buyckx. “I like Belgium, but I consider it almost as a transit zone in between my travels. It’s a good country to live in, but I get bored of it easily.” He has developed a love affair with the Balkans, and with Albania in particular, which he has visited 12 times in the past 10 years, and which he is constantly drawn back to. “Every year I go to Albania at least once. It’s such a beautiful country with the nicest people I’ve ever met… They really appreciate foreigners going there. They’re the most hospitable people – they invite you for a drink, food, to sleep, everywhere.

I wanted to explore nature, and to work in black and white... I need to be somewhere, to experience things, and to see them, to be inspired.

“What I really like is the slower pace of life. It hasn’t been over-developed yet – in the mountains people are just living like they used to, and that’s really nice. I like that. I like to be there. That’s the reason for my work – I want to go to places that even if I wasn’t making pictures, I would still want to go to.

“There are far fewer rules over there, too. The idea of freedom attracts me mentally, physically and visually. When there are fewer restrictions, more things happen that you wouldn’t expect. For instance, there might be a wedding, and the locals will just take out their guns and start shooting in the air because they like to do that, and it’s kind of a tradition. In Belgium, your neighbour would call the police, but in the Balkans the neighbours will bring out their own guns and join in.”

‘Wolf’, shot in Europe and Central Asia, looks at life lived in the full force of nature’s elements. It is rocky and textured, cold and hard, with night-time cows and huddled sheep. His images are observations of remote communities and striking landscapes. There is snow, but there is also the interior of a corn store, a curing bearskin pinned to the ground, and a man walking at night, captured in headlights. ‘Horse Head’ is a more discrete project, focusing on a village community in Kyrgyzstan, whose lives are moulded by horseback journeys moving their sheep to northern summer pastures, and keeping them safe during the hazards and blizzards of winter. The lifestyle of these semi-nomadic people seems to echo Buyckx’s own restlessness and need for a big open sky.

In February last year, Buyckx finished four months of work refurbishing a Ford Transit van into a camper van. “It’s the most regular van you could imagine. I built it inside myself, so you don’t see from the outside that it’s a camper. I don’t want to look like a tourist everywhere I go, and so, apart from the licence plate, nobody will see that I’m a foreigner. I like to be a little bit undercover, maybe.” It is a thing of adventuring beauty, a contemporary version of the romantic gypsy caravan, a vehicle full of potential for mountain travel and reaching the inaccessible. “I am very proud of it.

I look on a map to see if there is one small road going through a large area. That’s the road I want to take.

It’s got everything. The idea was that I wanted to build a mountain cabin on wheels.” A taxidermied squirrel droops from a shelf next to the spice rack in the tiny kitchen area, and a deer skull with antlers hangs on the wooden panelled interior walls. There are also bookshelves, a sofa bed and even a sheepskin rug from the Albanian mountains.

Buyckx has designed his van, and indeed his whole approach to life, in order to welcome chances and allow for serendipity. By starting on a journey with no particular destination, he finds out where he’s going. “What I do is look on a map to see if there is one small road going through a large area. That’s the road I want to take. Or I just drive along, and I think ‘the road to the left seems nice’, so I’ll just go left. Sometimes you end up in places, or you see things or people, who have this feeling of being lost, when you’re lost yourself.”

Somewhere, as you read this, there is a young man in a Transit, driving towards a vanishing horizon, searching for where the road peters out and the photos begin.