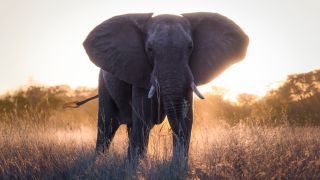 We’d been sat in our Toyota Hilux, still as statues, for five full minutes. Those 300 seconds felt like an eternity, as the elephant paced towards us like a beered-up thug barreling down a cramped corridor in a nightclub.

We had driven down a track and come face to face with the bull, blocking our path. He was in musth, his penis dripping, his mouth dribbling, with six times as much testosterone as normal coursing through his body. He was aggressive and we were in his way, so now he was agitated as well. Charles Ndhlovu, our guide, had immediately cut the engine and instructed no noise or movement.

Elephants don’t always break branches and kick up dust before they charge; even when hot-tempered, they are animals with reputable intelligence. He was being territorial, asserting his dominance, and our stillness and silence showed our subservience, calming his temper. As he snorted and stomped his way past the front of the 4x4 and around to its side, though, that reputable intelligence suddenly terrified me.

Does he understand that there are no bull bars at the side of this vehicle, as there are at the front? Does he know that if he charges side-on – my side-on – there is no protection and he will certainly kill me?

The path in front now clear, Charles saw his opportunity and started the engine. The noise angered the elephant and, despite Charles’ efforts not to rev too much, he felt that we were now challenging him. Enraged, he trumpeted as we pulled away – and, as I mourned the poor acceleration of the Hilux, he charged us.

Without exaggeration, it was a beat-for-beat recreation of the T-rex chase scene in Jurassic Park. Charles drove the vehicle as fast as it would go down the dirt track, but our speed never seemed enough as the elephant gained more and more momentum, trumpeting in rage and intent on driving its massive tusks through the backside of the Hilux – again, my side, and again with no protective bull bars.

Clearly, we survived to tell the tale. The bull gave up chase (though not before pretending to slow down, giving us a false sense of security, then resuming full charge), and for the rest of the trip we regarded every elephant – despite being mostly placid females and playful infants – with heightened trepidation.

We had travelled to Davison’s Camp in Zimbabwe, a private concession in Hwange National Park run by Wilderness Safaris. Founded in 1983, the group offers authentic African safaris with integrity, operating community and conservation initiatives that protect wildlife areas and ensure that the financial benefits flow back to the region and its people.

The purpose of the trip wasn’t just to get charged by elephants and photograph animals, but also to visit local villages, meet the people of Hwange, work with anti-poaching units and see some of the projects tasked with invigorating one of Africa’s most economically challenged regions.

One of Wilderness’ latest initiatives is a partnership with Olympus. Not only does each camp offer loan kit to visitors, but the guides have been trained with the gear and are skilled at finding and advising on the best shooting opportunities. Whether your dream is to photograph lions drinking at a watering hole during the dawn golden hour, or backlit elephants dusting as the sun sets, people like Charles can do their best to make those moments happen.

Because we were travelling to the camp by light aircraft (a six-seat Cessna 210) with a strict 10kg limit for kit, I had to pack very selectively. I knew that Olympus’ professional camera duo, the OM-D E-M1X and E-M1 Mark II, would be light enough to travel yet powerful enough to do the job – particularly with their weather sealing, as dust would be a big issue.

After 30 hours of travel we landed around 6:30pm at Linkwasha, the Wilderness airstrip where there were already elephants congregating. Wasting no time, we jumped straight from the Cessna into the Hilux and embarked on a sunset game drive en route to camp, where my very first frames in Africa were of elephants backlit by the sunset and frolicking at a water hole.

While our first full day in Hwange was scheduled to take in a number of the initiatives run by Wilderness, every destination was at least 45 minutes away (“depending on traffic,” as Charles put it, as you never know when your path will be interrupted by something like an elephant in musth). This meant that there were constant intermissions to shoot all manner of wildlife, from preening secretary birds to clownish baboons to elusive leopards.

We visited a village where the community is overcoming 21st century problems by combining traditional techniques with modern materials. Plastic litter and glass bottles are a big problem in the area, as there is no way to dispose of or recycle them. So groups of female basket weavers, 25-30 strong, have begun incorporating waste plastics into their weaving, producing unique and innovating baskets, mats and ornaments that can be taken to markets and sold to tourists.

Masonry in the region is benefitting from similar ingenuity. Empty glass bottles are being hand-crushed by groups of 10-12 workers, who then use the crushed glass as a compound for brick mortar. The shards glisten like jewels in the painstakingly produced brickwork, which is used to provide modern materials to build sturdier structures in the area.

In the same village we visited Ngano Primary School, where the results of Wilderness Safaris’ initiatives are being directly felt by the next generation. The school has benefitted from a well stocked library and children’s laptops, as well as banks of solar panels that enable the devices to be powered by the country’s greatest natural resource. In addition, a Solar Literacy project means that students can receive individual book-sized solar panels – enabling them to power lights and continue to read, even when the sun goes down.

One of the highlights of the entire trip was visiting the Scorpion anti-poaching unit, which had apprehended a pair of poachers the day of our arrival: a man in his thirties and a teenage boy, who had been caught setting snare traps. The Scorpions explained that the men were not poaching for the black market, but rather for the animals’ meat that they would either eat or sell. It was enlightening to see the reality that not all poachers are evil; some are just trying to feed their families, in a country where there is 95% unemployment and 10 million people are going hungry.

Our accommodation at Davison’s Camp was plush. While described as tents, and though certainly sheathed in canvas, that does the quarters quite a disservice. With full porcelain bathroom suite, super king size bed and multiple power points to charge batteries, it was a blissful place to rest your head at the end of the day – though we were warned that animals roam the camp after dark, so we had to be escorted to and from our rooms by armed guides, which made bumps in the night a little less easy to ignore.

Each morning heard a 5am “Wakey wakey!” friendly wakeup call from a guide, after which we breakfasted and set off by 5:45am for a sunrise game drive. We struck gold on our very first morning, not just because of the pristine golden hour dawn but because a pride of lions were feasting on an elephant carcass at a nearby watering hole. This was a fantastic opportunity to photograph the matriarchs eating, as well as youngsters pawing and playing around between bites.

Having recently decided to start a YouTube channel, I took advantage of the opportunity to shoot some footage for my vlog. Pairing the 300mm lens and MC-20 teleconverter, exploiting the 5-stop Sync-IS of the E-M1 bodies, it was possible to shoot 4K video at an equivalent 1200mm focal length handheld. I knew that Olympus’ stabilization was fantastic for stills, but this video performance truly blew me away.

The lions didn’t stay playful and sleepy for long, however. A buffalo had, brazenly or foolishly, wandered down to the other side of the watering hole for a drink. Despite already having full bellies, plus the rest of a carcass to eat, the pride couldn’t help itself and began maneuvering round to stalk its fresh prey.

Charles likewise repositioned our vehicle, joining a couple of other Wilderness 4x4s up on an embankment for a better vantage point. As a guest in another Hilux wrestled a pair of tank-like DSLRs out of his bags and struggled to stabilize his bazooka-sized lenses on an awkwardly raised knee, I was grateful to be using Micro Four Thirds kit.

Hot-swapping between the two bodies and their 40-150mm and 300mm lenses, I was able to get shoot the lions as they flanked, surrounded and attacked the buffalo – though the full bellies were their downfall, as the buffalo was able to fend off their half-hearted offense.

Some of the E-M1 pair’s other tricks came in handy elsewhere on the trip, namely Pro Capture – a feature that starts buffering frames as soon as you half-press the shutter. By recording the last 15 frames before you fire the shutter and the 20 frames afterwards, you never miss that decisive moment – which was perfect for capturing birds in flight, cubs play fighting, or getting the perfect cloud of dust on a sandbathing elephant.

While Wilderness doesn’t pitch itself as a photographic safari tour operator, the images I came home with were at least 50% down to the experience and expertise of our guide. Without Charles asking what we wanted to shoot and where we wanted the light to be, and then putting us in the right place at the right time, all the Pro Capturing in the world wouldn’t have got me the shots.

At the same time, when a full-frame 600mm f/4 lens is 3.9kg and 13 grand (as opposed to 1.2kg and 2,300 bucks for the Olympus), I simply couldn’t have brought my equivalent full-frame kit within that 10kg limit. While the gear is never more important than the idea, when weight and travelability are crucial, sometimes it makes all the difference.

There are photographs of Hwange that I’ll cherish forever. A baby elephant with a feather in its mouth like Dumbo. A mother cheetah crying out for her cub. A hippo snapping its jaws. However, I’ll never again be able to hear the Jurassic Park theme without thinking of a five-ton elephant charging right at me.

For more information, visit www.wilderness-safaris.com and www.olympus.co.uk. A vlog of the trip can be seen at www.youtube.com/c/Artaius.