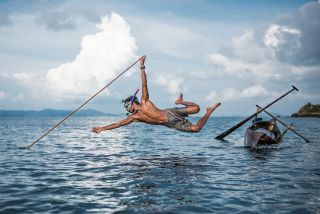 For the second year running, Neville Brody has also been selected as the Lead Judge for the Nikon Photo Contest, which is celebrating its 50th anniversary and is open for entries until 31st January 2019.

Brody is considered to be widely influential among a variety of artists and photographers. His work spans more than three decades, ranging from album sleeves for the likes of British band Depeche Mode to one of his most recent projects designing the new typeface for Coca-Cola.

In this Q&A, he offers an insight into the ever-changing landscape of photography; how it’s evolved over past years, the impact of smartphones on the discipline and where he sees it heading in the future…

Digital Camera World: Do you think photography has a bigger role to play, beyond storytelling?

Neil Brody: Photography is more than just storytelling. It’s critical in supporting, educating and revealing. It challenges the stereotypes of what we previously thought about the world. Photography allows us to think about what’s dangerous and what future problems we need become aware of. British broadcaster David Attenborough’s Blue Planet (i.e. aerial photography showcasing climate change) is a prime example of how imagery can impact the politics of entire countries and regions.

DCW: What do you think makes a good image?

NB: There are many elements which make a good image. Classical composition featured heavily in last year’s standout entrants, and much of the winning imagery utilised classical structures, almost like paintings; a sense of composition, knowing where to place the subject matter, balancing light and dark, all become paramount. This isn’t from a technical point of view, but from a structural and storytelling perspective.

DCW: Is there a particular era of photography which really stands out for you?

NB: Regarding eras of photography that stand out to me, Magnum photography was a huge influence on my work. The imagery saw reportage being used as a way of bringing stories home in an iconic way.

The art direction of Alexey Brodovitch and his approach to image-making as an iconic and graphic element which worked well with type was also hugely influential on photography and my career.

A particularly historic era for me is Constructivism and the Bauhaus. The camera was relatively new, and had previously been used mainly for entertainment or religious purposes, but was suddenly being used in a social capacity and recording the world in a way that was fresh and had never been done before.

These eras form the basis of how we view photography today. Over the last few years I think the best photography has been in the field of fashion from the likes of Nick Knight and Juergen Teller.

DCW: Many people don’t consider photography as art. What would you say to that?

NB: Photography isn’t just art, but can be art. We wouldn’t look at Magnum photography as art for example – it’s information-providing, scene setting, emotive and dramatic.

Whereas for example there is a New York photographer, Loreal Prystaj, who is exploring real world surrealism to look at feminism and female identity as art. We’re seeing a lot of politics expressed through ‘art’ photography, which is great.

DCW: Can you remember your first camera or your earliest memories using a camera?

NB: My earliest memory of using a camera… my father repaired cameras for a living, so they have been an intrinsic part of my life since birth. He became quite challenged by the fact that digital cameras were becoming so complex that they were almost irreparable and had to be thrown out. He introduced me to wide angle, large format, and panoramic cameras – all of which we’re now rediscovering through digital capabilities.

DCW: How have smartphones influenced or changed photography? How can system cameras remain relevant?

NB: Smartphones are influencing photography; people have got so used to editing, filtering or what I call ‘cartoonifying’ images. We now view nearly all photography on small screens, which means images have had to become more immediately iconic and simpler to read. This has resulted in a dumbing-down in some areas, but also allowed for new forms of photography and meaning.

System cameras can remain relevant though, I see them increasingly attached to larger format, more difficult photography that demands a bigger canvas. It’s a higher-end, more exploratory and interrogative photography.

In much the same way we’ve returned to vinyl and physical books, the digital rise has given system cameras a new lease of life.

DCW: How do you see photography evolving in the future?

NB: In terms of how photography will evolve in the future – it will continue to shine a light into unforeseen corners of the planet, and even our universe. Photography is a crucial part of understanding where we came from and where we might be headed. Whether it’s macro photography looking at the smallest detail, or underwater cameras documenting the depths of the ocean, photography uniquely allows us to observe our planet without being disruptive to life around us.

DCW: Would it be fair to say you are you optimistic about the relevance of photography and where it’s going?

NB: Photography is so new in the history of civilisation. It wasn’t that long ago that it was an elite, expert area – now it’s open to all. However, even though we can all read and write, we still need great writers and novelists.

The ubiquity of photography is going to open more doors for more people to rise up. It’s an exciting land of opportunity and hopefully we’ll see this represented in the Nikon Photo Contest entries.

DCW: What are you looking for in the winning images?

NB: The judging panel this year is looking to be told something ‘new’. It comes down to storytelling, and how well the images engage the viewer. Standout images will have a depth of subject; a meaning that goes beyond a visually appealing picture.We’re also looking for excellence and technical prowess, photographers who really understand the machine they are using and are creative with the equipment they have. How have they pushed the camera’s capabilities beyond auto settings?

DCW: The theme for this year’s Open Category is change. What role do you think photography has in effecting change?

NB: The Open Category theme of ‘Change’ is specific to the world we are living in now and the huge changes we’ve experienced in such a short time. We are looking for photography to let us know what is happening in the hidden corners of our changing world. Photography isn’t effecting change in itself, but it is helping create global awareness about what’s going on and inspiring reaction.

DCW: The theme for this year’s Next Generation award is identity. How do you think photography enables self-expression?

NB: Photography is more than just self-expression. The ‘selfie’ has become so ingrained in our culture, we now have an entire generation identifying themselves through these images and behaviours. For the Next Generation category, we’re interested in how photography can transcend this – to describe and amplify ‘Identity’ through observation. We want images that rebel against the generalisation of identity, to celebrate the sense of difference and address it in a social and political context.

DCW: The Short Film award theme is hope. How can entrants set themselves apart in the video category?

NB: There exists a cliché about hope in film, and we want encourage entrants to The Short Film Award to move away from this. We’re looking for original ideas. This is one of the first times in history where the sense of our children inheriting a better world than us is no longer valid. So where does ’hope’ lie? We want guidance on the sort of hope we should be looking for, what areas can bring optimism, and how these are expressed technically – through direction, subject, narrative, framing, colour and sound.

The Nikon Photo Contest is open for entries until 31st January 2019.