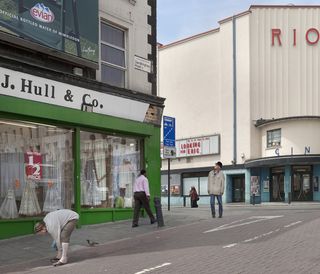 We spoke with photographer Chris Dorley-Brown about his Corners project, where he creates hyperreal scenes of street corners by compositing sequences of shots together taken several minutes apart…

The Corners comprises of 48 colour photos of East End street corners shot between 2009 and 2017. It’s about nothing, but the subject matter is a document of a place and a time. I was keen to make a simple documentary series that was non-thematic, other than the fact that is was using the street corner as a point of reference. What was interesting to me was it was metaphor for collisions, departures, meetings and mystery – we’re never really sure what’s around the corner.

People meet on these corners, so they represent a point of meeting. I thought it would be a useful way of studying contemporary London and the issues that we’re talking about these days. Issues like immigration and Brexit, but without being too overt about that. Those subjects are hard to ignore and get away from. I didn’t want to remove them, but I didn’t want to make a polemical deliberate book just about Brexit or just about national identity. I wanted it to be wider than that.

Also for me the book is about trying to mix two different genres of photography – architectural and reportage. I wanted to give equal weight to the buildings and to the people passing by. In order to do that I decided to use a composite technique that allowed me to work outside the traditional 1/60 sec time-frame and work with a longer period of study. As a result each picture is maybe 20 minutes to an hour, and I was selective about what happened then during that time.

The people in the images may have never met or even seen each other, but the way I’ve composited them I was maybe suggesting they did have a relationship or they did know each other. Or that they were sort of relating to each other in a way – not in all cases but in some. This allowed me to concentrate on the people and emphasize the nuances of their position; their body language; their clothes; and the way they were walking. As each person passed me I would photograph them three or four times, and I’d select the one I liked according to their position in the frame; their movement, their body language and if I could match that up with somebody else.

The project came about when I started photographing areas of the East End of London where my parents lived post-war. I wanted to get cleaner shots without traffic and other distractions – so I shot several photos and stitched them together to avoid clutter. The resulting shots had a surreal feel to them, which I loved.

I started with a Nikon D100, which only had a six megapixel sensor, but I realized that by stitching these images together I was creating incredibly high-resolution images that were half a gigabyte in size. The main lenses I used were an old Nikon 85mm f/1.4 and 70-300mm f/4.5-5.6 – this isn’t an expensive lens, but it’s super-sharp.

I’d first shoot a sequence of several rows to make the background, then shoot people as they passed by. Most of the images are shot handheld – the stitching software is so good that the end shots looked seamless, after some post. The resulting photographs were a bit like a David Hockney ‘joiner’.

I adored the process of seeing the shots come together. I would shoot the images of a street corner on one day, then it would take at least another day to put them together. The process was slow and it reminded me of the days of film photography, where you couldn’t see the end result immediately…

The Corners by Chris Dorley-Brown is £30 in hardback and published by Hoxton Mini-Press.