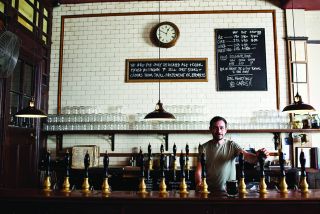 Multilocalism is a series of photographs that explores what it means to be a multilocal in 2018. The collection is a representation of London’s community, featuring 10 straight-up street portraits, and 10 portraits of small business owners in London.

We shortlisted and contacted small businesses, explaining what we were doing and why, and I visited them to do a tech recce and to make sure they offered what we needed for the images. Some of the locations I chose myself through familiarity; I live in East London so I knew exactly where to go for certain looks.

The shoots were done over three days but there was a lot of pre-production that went into it before, and of course time for editing and image processing.

The series was shot as part of the latest visual trend from Adobe Stock – who asked for ‘straight-up’, authentic portraits, shot naturally in the way that looked as if I’d just knocked on the door of the businesses or approached people in the street. I started out by getting those shots covered, particularly with the small businesses, after that there were some great opportunities to get other images of people at work to supplement the portraits. Despite having a brief, the off-shots meant it took on a life of its own and the producer had left us space in the schedule for that to happen.

My assistant Alex Ingram was holding an Elinchrom Quadra Ranger on the end of a boom pole for most of the three days, to kick a bit of warm backlight on to the portraits – the flash had a CTO gel.

While creating this series I enjoyed meeting the people and having fun with everybody who worked on the shoot. We captured the landlord of my favourite pub in London (Southampton Arms), a brewer, a butcher, a barber, a busker and all sorts of interesting people.

I love portraits and often the simplest ones are the best. There was also a flexibility in the task as well, which allowed us to add in ideas along the way. It’s good to have some time and space for things to happen that you can’t plan for and it takes a trusting client to allow that to happen. We had everything pinned down that was required for the brief but allowing us flexibility meant we took advantage of opportunities that couldn’t have been planned for.

For example, the close-up portrait of the Sikh businessman was meant to be shot on a busy street or a business district. Instead, we found a nice (ish) looking alleyway near Liverpool Street station on Bishopsgate, London, and spent 10 minutes shooting something a bit different to what we planned. The pre-production process was where there were most challenges, which was largely out of my hands. We were heavily reliant on the goodwill of business owners to give us access at a time that suited them, so we could get in with equipment and take up their time.

Co-ordinating 10 busy business owners to be available one after another over three days wasn’t easy, but thankfully the producer had everything planned in advance. We had to be mobile and move from one location to another quickly.

The collection is part of a collaboration with Adobe Stock as part of its Visual Trend Multilocalism collection.

The best photography books for beginners and pros