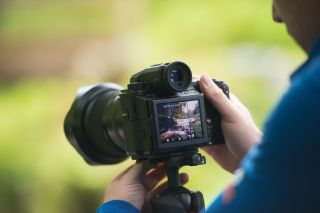 Missed the earlier parts of this feature? Catch up with part one, part two, part three and part four

If you’ve been following this Fujifilm GFX 50S field test, you’ll know that we spent a day with two customers of LCE’s Strand branch in Wales, in order to get to grips with Fujifilm’s medium format mirrorless camera in a landscape setting.

Sanj Maghera and Wesley Deprez were accompanied by Digital Camera’s contributing editor, Marcus Hawkins, who was on hand to find the right locations and chew the fat about cameras and photography.

So what were the talking points and takeaways of the day?

Weight – or the lack of it – is the first thing that struck the pair. You can see from the photos of the camera in Wes’s and Sanj’s hands throughout this feature, that the GFX 50S is anything but a bulky medium format body. It is, after all, a mirrorless camera, and if you remove the detachable EVF and you get can slim down the profile further.

Even with the lenses we had available for the day – a Fujinon GF 23mm f/4 R LM WR wide-angle and a GF 32-64mm f/4 LM WR zoom – the set-up could be comfortably handheld. To be fair, Wes and Sanj only used the camera like this to initially frame up shots, as they were working from tripods for the majority of the day. The balance of the GFX 50S with the 32-64mm was of particular note too.

Although Fujifilm’s medium format camera can’t match the shooting speed of a high-end DSLR, with continuous bursts ranging from around 1.8fps to 3fps depending on the file compression selected, that wasn’t a concern when it came to shooting landscapes. Neither was the speed of autofocus.

That didn’t mean the GFX 50S was a slow-handling camera. There are a number of touches that kept the navigation experience a relatively light one.

For example, the camera has separate dials for setting shutter speed and ISO, in addition to an aperture ring on each lens. But setting the shutter speed dial to its ’T’ position, and the aperture ring/ISO dial to ‘C’, meant that settings could be changed using the GFX 50S’s two command dials, located at the front and rear of the grip.

This is a potentially more intuitive set-up if you’re stepping up from a traditional DSLR.

The GFX 50S’s top-plate, white-out-of-black LCD enables key settings to be monitored as adjustments are made, and even this offers a degree of customisation for up to eight items.

Other useful features for landscape photography include a 3D electronic level, interval timer shooting for time-lapse sequences, focus peaking for manual focusing and a depth of field scale.

Of course, it’s the 51.4MP sensor that’s the real talking point, and being 1.7x larger than a full-frame DSLR sensor, it delivered masses of detail.

It’s also not bad for selfies too.

Check out the other parts of this Fujifilm GFX 50S landscape photography article via the links below, and see more in the October issue of Digital Camera magazine, which is available now.