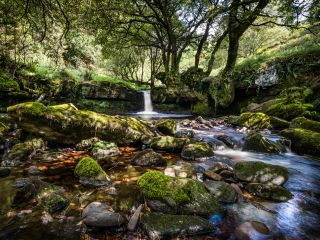 Missed the earlier parts of this feature? Catch up with part one and part two and part three

Sanj Maghera and Wesley Deprez are customers of the Strand branch of London Camera Exchange. Both keen outdoor photographers, they’ve been testing out the Fujifilm GFX 50S with Digital Camera in the rugged beauty of the Brecon Beacons.

We spent the morning photographing waterfalls, a real test for the Fujifilm GFX 50S’s dynamic range. The trees and bushes were in full leaf, resulting in deep shadows and pockets of hard light.

Wes metered for the highlights, plunging the rest of the shot into darkness, but you can see how much detail we were able to pull back in the shadows while processing the shot in Adobe Camera Raw.

He was using the Fujinon GF 23mm f/4 R LM WR wide-angle lens, which gives the equivalent view of 18mm on a full-frame DSLR.

This allowed him to take in a large sweep of foreground detail, with the bright tilting touchscreen enabling accurate framing at low level in the shade.

Here’s another shot, this time from Sanj. The original stitched panoramic photo – all 229MB and 123cm of it – has plenty of detail, as you’d expect from the camera's medium format image sensor.

Sanj tried a black and white version too, using the ACROS Film Simulation option. The GFX 50S offers three filter options for its ACROS and Monochrome film modes – Yellow, Red and Green – as well as a Sepia setting.

The 65:24 format will be familiar to users of the super-wide Hasselblad XPan film camera. Even with the GFX 50S’s 51.4MP sensor reduced to this lean letterbox format, it still delivers a 25MB image.

With Wes and Sanj spending time familiarising themselves with the camera in the morning, and LEE Big Stopper-filtered long exposures and panoramic shots thrown into the mix, the camera's battery life was obviously a concern at this point in the day.

Fujifilm officially rates the GFX 50S’s NP-T125 battery for around 400 shots. In order to squeeze as much as possible out of the camera in the final few hours, standby mode, which deactivates all displays bar the Sub LCD Monitor when the camera isn’t being operated, was set to a suitably short time. It can be reduced from 5 minutes down to just 15 seconds.

We’ll be bringing you a final instalment from this Fujifilm GFX 50S landscape photography session next week – and you can see the results of Sanj and Wes’s day in the October issue of Digital Camera magazine, which is on sale in the UK now.