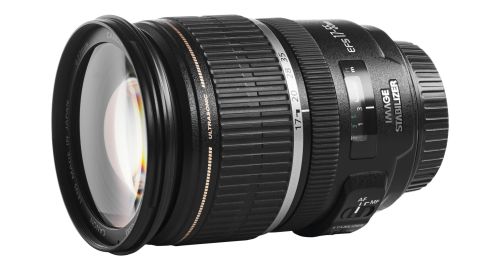 The Canon EF-S 17-55mm f/2.8 IS gives APS-C shooters a taste of the premium lifestyle, with a smooth constant f/2.8 aperture and a generously wide zoom range for a standard lens. It’s getting a little old in the tooth and does show its age in a few ways, most notably in its unexceptional three-stop image stabiliser, but overall this is a really strong lens that any Canon APS-C user could potentially find a home for.

Dating back to 2006, the Canon EF-S 17-55mm f/2.8 IS USM is the most up-market standard zoom that Canon has ever made for its APS-C format cameras. As such, it has a relatively fast f/2.8 aperture rating, which remains constant throughout the entire zoom range. The zoom range itself is equivalent to 27-88mm in full-frame terms, beating out many competing lenses at the long end.

This lens is big and heavy, but it doesn’t feel unbalanced even on the smallest of Canon’s SLRs, tipping the scales at 645g. With its focal length markings on a silver band, and the gold ‘ultrasonic’ ring around the front, the lens has a more dated look than some newer, sleeker Canon lenses, and its older-generation image stabiliser is only worth three stops rather than four.

The lens isn’t weather-sealed and, as usual with non L-series Canon lenses, you will need to buy the hood separately. Expect to pay around £29/$49 for the genuine Canon EW-83J.

In our thorough testing, the autofocus system proved quick and consistently accurate. Good levels of sharpness and contrast don’t drop off much, even when shooting wide-open, where the f/2.8 aperture enables a pleasantly smooth bokeh (the quality of defocused areas). Barrel distortion is particularly well controlled at the short end of the zoom range, while colour fringing is fairly minimal. Overall, this lens is the pick of the crop for APS-C format cameras.

Its 77mm filter thread is large for an APS-C format lens, so if you’ve already got a collection of APS-C lenses and corresponding filters, you may want to think twice before buying this one. If this isn’t an issue, however, you’ll find this to be an excellent standard lens for an APS-C DSLR. Its focal range is great for all sorts of general-purpose work, while the maximum aperture of f/2.8 allows you to continue shooting even when the light gets low, while also being solid for portraiture.